The Marine Corps may finally adopt a new sniper rifle through a stroke of luck: Army officials, continuing to develop... 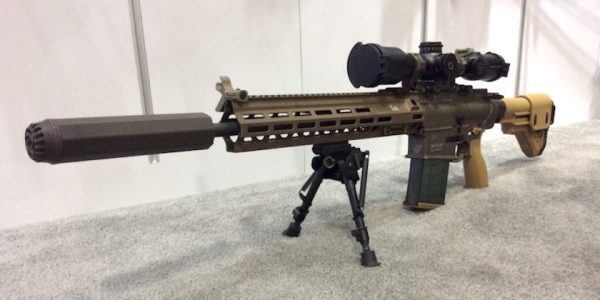 The Marine Corps may finally adopt a new sniper rifle through a stroke of luck: Army officials, continuing to develop their own brand-new sniper rifle, told Task & Purpose that both the Marines and Air Force “are committed” to purchasing the weapon once the Army signs off on the improved system.

Despite the budget turmoil currently rankling lawmakers and Department of Defense planners, the Army is moving ahead with the Compact Semi-Automatic Sniper System (CSASS), PEO Soldier spokeswoman Debi Dawson confirmed to Task & Purpose on Jan. 24, adding that “all [CSASS’s] sniper performance requirements and capabilities are still valid.” (Marine Corps Systems Command did not immediately respond to request for comment.)

The CSASS program was established in 2015 to field a replacement for the M110 Semi-Automatic Sniper System. In August 2016, Heckler & Koch ended the Army’s search, winning a $44.5 million contract for a lightweight version of its 7.62 mm G28E sniper rifle with a baffle-less OSS suppressor.

The CSASS program has persisted despite the ever-present specter of cancellation. Last fall, the Army scrapped its 7.62mm Interim Combat Service Rifle (ICSR) program just over a month after its first solicitation — a victim of shortfalls and budget uncertainties that have become a fixture of the military landscape as Congress funds the DoD with a patchwork of continuing resolutions. But when the ICSR went away, PEO Soldier reassured Task & Purpose that the CSASS program would not meet the same fate.

The adoption of the CSASS by the Marine Corps would be a major coup for the service. The Marines have struggled to adopt a much-needed replacement for the M110 and M40A5 — the latest variant on the Vietnam-era pattern that fielded to Marines during the 2003 invasion of Iraq. The service’s delay has reportedly stoked frustration among scout snipers, who complain of their rifles’ limited range and light-caliber ammo.

It’s unclear if adopting CSASS will actually allay the frustrations of the Corps’ scout snipers. Marine snipers wielding the M40A5 are accurate at a distance of up to 1,000 meters, according to Military.com. The HK G28 selected for the CSASS can only provide accurate fire at up to 600 meters.

Should the Corps end up adopting the CSASS, it’s unclear where exactly the sniper system will fit in a platoon’s arsenal. Digital gun encyclopedia Modern Firearms suggests that the CSASS is best used “as a support weapon at squad level during foot patrols.” But as recently as December, the Corps was testing a variant of the much-loved M27 Infantry Automatic Rifle for potential use in a squad designated marksman role, even though the CSASS has an extra 50 to 100 meters in range on the IAR.

All of this may be moot if the Army somehow bungles the CSASS acquisition. Though Dawson stated last September that the CSASS “has encountered no obstacles,” she told Task & Purpose today that the branch “has not yet identified production funding” for the CSASS. Whether the Marines and Air Force actually get their hands on the new sniper system depends entirely on the Army — and, in turn, whether lawmakers get their shit together enough to give U.S. troops downrange the tools their need to get the job done.