After a seeming eternity of waiting, the Army will officially field Sig Sauer’s P320 to soldiers downrange in November, the... 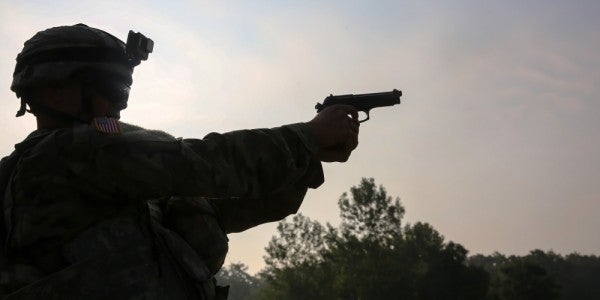 After a seeming eternity of waiting, the Army will officially field Sig Sauer’s P320 to soldiers downrange in November, the branch announced on July 21, a proclamation that signals the end of the turbulent six-year-long Modular Handgun System program.

As previously announced in May, soldiers with the 101st Airborne Division at Fort Campbell, Kentucky, will receive the branch’s first 2,000 Sig Sauer P320 sidearms as the XM17, replacing the fraught Beretta M9 pistol adopted in the 1980s. It will take 10 months for the Army to distribute the handgun across all units, from November 2017 until September 2018.

According to Soldier Weapons Product Manager Lt. Col. Steven Power, trials of the new Sig resulted in “overwhelmingly positive feedback” regarding the XM17’s suitability as an M9 replacement. “That's an uncommonly positive thing,” Power said in an Army release. “Typically even in our own households, when you're buying a new car, there's things that people like about the old car better than the new one.”

Related: The Army’s New Sig Pistol Is A Huge Step Up»

Although the Modular Handgun System program ran two year years shorter than the Joint Service Small Arms Program the Department of Defense initiated in 1977 to replace the Smith & Wesson Combat Masterpiece (M15) with the Beretta M9, the search for a new Army sidearm has seen its share of controversy in recent months stemming from Sig Sauer and Glock competition for the branch’s 10-year, $580 million contract.

Shortly after the Army announced its selection of the P320 for the service branch’s sidearm in February, Glock lodged a protest claiming not only that Army Material Command “improperly failed to complete reliability testing on Sig Sauer’s compact handgun” due to a truncated testing timeline, but that the branch’s “evaluations under the price, license rights, manual safety, and penetration factors and subfactors were flawed.”

The Army's new modular handgun, the XM17 and XM18, will be fielded by the 101st Airborne Division at Fort Campbell, Kentucky, in November.Photo via DoD/Sig Sauer

In June, the Government Accountability Office finally denied Glock’s protest, determining that while “the agency’s evaluation contained some errors” — namely branch’s $1.6 million ammo license miscalculation — those mistakes “they did not result in prejudice to the protester.”

Related: Here’s What The Future Of The Army’s Small-Arms Program Looks Like»

Glock is obviously not happy about the decision. Shortly after the GAO report dropped, the Georgia-based company released photos of the mm Glock 19 and .40 caliber Glock 23 pistols submitted as part of the MHS competition — a taste of what the branch is missing.

One week later, Glock challenged the Army to complete its Modular Handgun System tests before finally settling on Sig Sauer, claiming that the choice of the P320 was “driven by cost savings, not performance,” as Military.com reported at the time.

“This is not about Glock. This is not about Sig. And it’s not about the U.S. Army,” Glock, Inc. Vice President Josh Dorsey said in a statement. “It’s about those that are on the ground, in harm’s way.” (The Army flatly denied Glock’s request).

With the 101st Airborne set to see its new sidearms in November, it appears Sig Sauer’s struggle with Glock over the distinguished title of favored military sidearm is at an end. And that’s not just good news for the Army. It also means those 195,000 additional M17s reportedly desired by the Air Force, Navy, and Marine Corps may end up in American holsters sooner than expected.