The Army Is Looking For A New Squad Designated Marksman Rifle

Editor’s Note: This article by Matthew Cox originally appeared on Military.com, the premier source of information for the military and veteran community.... 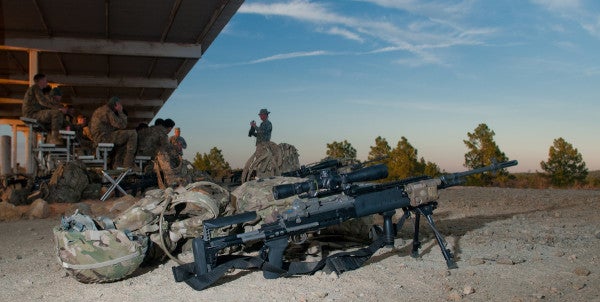 The U.S. Army soon will begin searching for a 7.62mm rifle to become its formal squad designated marksman rifle for combat platoons and squads.

A recent directed requirement from Vice Chief of Staff Gen. Daniel Allyn prompted Army weapons officials to write a new requirement, and most likely they will conduct a competition that will result in the service equipping each combat arms squad with a new 7.62mm squad designated marksman rifle, Matt Walker, deputy for the Lethality Branch at the Maneuver Center for Excellence at Fort Benning, Georgia, told Military.com.

Equipping units with SDM rifles so they can shoot farther than the standard 5.56mm M4 carbine is not new.

Weapons officials have “operational need statements from every unit that has deployed for the last 16 years saying that 'a squad designated marksman is a requirement in theater,' ” Walker said.

“The presence of a 7.62mm rifle in the formation is nothing new, but when leave theater, they have to turn their guns in,” he said. “A lot of the division and the corps commanders are very adamant saying, 'Hey, we need to get those assets back in order to train with them to be competent.'

“The directed requirement for squad designated marksman has formalized, resourced and begun the process of getting those rifles on a full-time basis.”

Since 2009, the Army's SBR has been the Enhanced Battle Rifle, or EBR, 14 — a modernized M14 equipped with a Sage International adjustable aluminum stock with pistol grip, a Leupold 3.5×10 power scope and Harris bipod legs.

The Army adopted the EBR concept, first used in 2004 by Navy SEALs, in response to the growing need of infantry squads operating in Afghanistan to engage enemy fighters at longer ranges.

The EBR is heavy, just under 15 pounds unloaded, compared with the standard M14's unloaded weight of 9 pounds.

“Obviously, resources being what they are, there are people who say, 'Well, we got all these EBR14s,' and there are people that say, 'That is too heavy a load; we have learned that lesson so let's do something right by the soldier,' ” Walker said, adding “I'm pretty sure it is going to be a new gun.”

There are other 7.62mm rifles in the inventory that could work as an SDM.

Last year, the Army selected the G28, a 7.62mm rifle made by Heckler & Koch, as its new Compact Semi-Automatic Sniper System.

Part of the goal of the effort was to arm snipers with a rifle that doesn't stick out to the enemy as a sniper weapon. The M110 Semi-Automatic Sniper System, or SASS, made by Knight's Armament Company — the Army's previous semi auto sniper rifle — is easier to recognize since it's 46.5 inches with suppressor, more than 13 inches longer than the M4.

There is also the MK17 Special Operations Forces Combat Assault Rifle, or SCAR, in 7.62mm.

“But none of those, the M110, the SCAR or the SASS replacement … have an open contract, so we are going to need some new contract vehicle to procure these SDM rifles,” Walker said.

He said it is unclear when the new SDM will be fielded, but “I would say you will see it in the next 24 months.”

The next step is for the Maneuver Center to write a requirements document for the new SDM rifle over the next 120 days, Walker said.

The goal is to find a rifle similar in size and weight to the service's new Compact Semi-Automatic Sniper System, which weighs just over 11 pounds, he said.

And weapons officials want to stay away from sniper scopes, he said.

“We don't want to give a guy a sniper scope because there is a level of training that goes along with that mil dot reticle,” Walker said. “We would much rather use an intuitive reticle … that has a 1x to 6x zoom capability, so a kid that is doing an entry as a member of a team in a room is on 1x and still has that red dot for him to use in close combat.

“But when he is out on patrol and is scanning at range, he can zoom in on things and give squad leaders updates in regards to what that guy in the distance is doing … It's not just engagement; it's for situational awareness.”