The Army claims its new assault rifle will unleash a hailstorm of specially-designed shells with as much chamber pressure as... 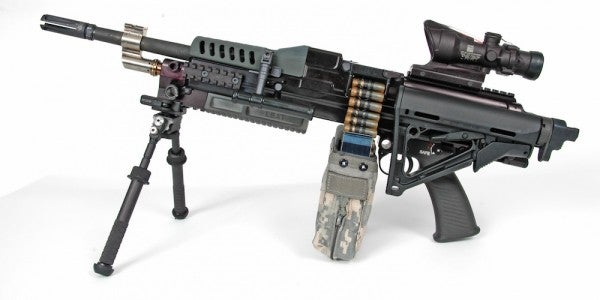 The Army claims its new assault rifle will unleash a hailstorm of specially-designed shells with as much chamber pressure as a battle tank to tear through even the most advanced body armor — and if all goes according to plan, the soldiers will get them to play with sooner than they thought.

The service plans on fielding a Next Generation Squad Automatic Rifle (NGSAR) — the first version in the Army’s Next-Generation Weapons System that chambers a round between 6.5mm and 6.8mm — as a potential replacement for its 80,000 M249 SAWs starting in fiscal 2022 rather than the original target date of fiscal 2025, Col. Geoffrey A. Norman, force development division chief at Army HQ, told Task & Purpose, with two per nine-man infantry squad.

While the service still hasn’t set official requirements for the system, the NGSAR will weigh less, shoot farther, and pack more punch than the service’s existing infantry weapons, Norman told Task & Purpose. And more importantly, the platform will incorporate a chamber pressure superior to the current system in soldiers’ arsenals to ensure that the rounds can still blast through enhanced enemy body armor at up to 600 meters.

The goal, as Norman put it, is to equip infantry soldiers with an automatic rifle “that fires a small bullet at the pressure equivalent to what a tank would fire.”

“The chamber pressure for the standard assault rifle is around 45 KSI , but we’re looking for between 60 and 80 KSI … the chamber pressure when an M1 Abrams tank fires is on that order,” Norman told Task & Purpose. “We’re looking to reach out around 600 meters and have lethal effects even if the target is protected by body armor.”

The NGSW program currently consists of the NGSAR, a Next Generation Squad Carbine (NGSC), and a squad designated marksman rifle, along with specialized ammunition and fire control system. But while the Army had previously focused on fielding an improved carbine with a range and accuracy superior to the standard M4 that would also chamber a round between 6.5mm and 6.8mm, the service recently changed gears to prioritize the muscular automatic NGSAR.

The reason, according to Norman, is the Pentagon’s current shift from the close quarters of urban warfare in Iraq and Syria to the mountains and open terrain of Afghanistan. While the carbine may be well-suited for a knock-down, drag-out brawl while moving house to house in cities like Mosul and Raqqa, it lacks the range to take out Taliban and ISIS fighters in open stretches

“For the past 10 or 15 years, we’ve been really focused on the requirement of lethal effects against unprotected targets,” Norman said. “Now we’re looking at near-peer threats like Russia and others. We need to have lethal effects against protected targets and we need to have requirements for long-range lethality in places like Afghanistan, where you’re fighting from mountaintop to mountaintop over extended ranges.”

The service is certainly working overtime to get the muscular system turning militants into pink mist downrange. Gordon told Task & Purpose that the NGSW systems currently undergoing testing and evaluation by the Soldier Lethality Cross-Functional Team at Fort Benning, Georgia will initially head downrange with the 7.62mm XM11158 Advanced Armor Piercing (ADVAP) round while the service hacks away at a specialized round built to achieve the proper balance between range and lethality.

“The challenge of the 5.56mm is that it doesn’t have enough mass ,” Norman said, referring to Chief of Staff Gen. Mark A. Milley’s April 2017 testimony before lawmakers on the Army’s growing ammo problem downrange. “But the challenge with 7.62mm ammo is that it has too much mass and not enough propellant. The right solution is somewhere between the two, where you have enough mass to penetrate but you’re still moving fast enough.”

But the real heart of the NGSW program is the fire control system, developed independently from the receiver and chamber. While the Army has spent years evaluating off-the-shelf options for soldiers’ next assault rifle — see the Interim Combat Service Rifle program aborted in November due to weight concerns rather than budget jousting — Norman characterized the proprietary fire-control system as a miniaturized version of the systems utilized by ground vehicles and aviation platforms.

“We’re exploring several options to ensure that what the gun aims at, it actually hits,”Norman told Task & Purpose. “The system will adjust and potentially only fire when the muzzle will line up with its target. It will take into account atmospheric conditions, even automatically center the weapon using an internal system. We’re looking to get these capabilities ready as soon as possible.”

The Army’s hard target of a 2022 fielding may seem ambitious, especially given the maddeningly batshit nature of defense acquisition. But the service isn’t the only one putting the NGSW in the crosshairs: According to Norman, the Corps is also interested in adopting the NGSAR alongside the M27 and M1101 CSASS sniper rifle the Army has eyed in recent years. And with the campaign against ISIS in close-quarters environs like Iraq and Syria winding down, soldiers and infantry Marines could use the range and the punch of the system sooner rather than later.

“We’ve got support from Congress and the Secretary of Defense as part of our close combat strategic portfolio review,” Norman told Task & Purpose. “We’re not going to replace all 80,000 SAWs right away — but the intent is to get this AR variant out to infantry squads as soon as possible.”