The Army Hints At Bringing Back World War II Uniforms, And The Internet Freaks

The Army is going retro. That's the news from the Association of the U.S. Army's annual conference in Washington, where... 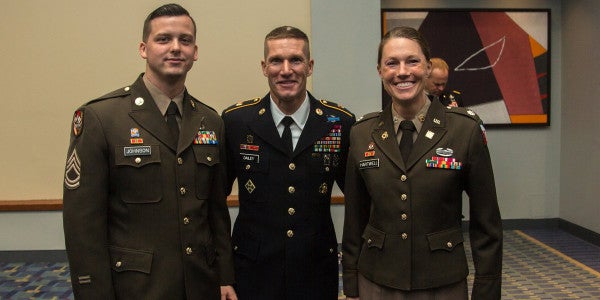 The Army is going retro.

That's the news from the Association of the U.S. Army's annual conference in Washington, where Bradleys and Strykers aren't the only chassis getting a fancy makeover: Soldiers, it turns out, may be next to receive a new, old coat — specifically, an olive coat with a khaki blouse, reminiscent of the service's World War II-era “pink and green” service uniform.

The Army strategically deployed a few soldiers donning the uniforms, with combination covers and garrison caps, on the AUSA convention floor:

This could be your new dress uniform. Here is a preview of what it might look like! #AUSA2017 @USArmy @armyreserve75 pic.twitter.com/cWCOL8DXKA

And the internet, predictably, freaked out:

WE HAVE A PINKS AND GREENS UNIFORM SIGHTING THIS IS NOT A DRILL 🚨 AUUUGAH AUUUGAH 🚨 #AUSA2017 pic.twitter.com/PSt4SDmHH9

Me, looking at pictures of the new pinks and greens: Brown with slightly more different brown. I like it.

Sgt. Major of the Army Dan Dailey has been personally spearheading the push for the new uniform, a possible “alternative to the blue Army Service Uniform for official events,” Defense News reported Oct. 10.

“And you won‘t have to pay them for them,” Dailey said to reporters at AUSA. Which is true of the enlisted soldiers who receive a clothing allowance, at least. But officers are unlikely to be thrilled — not just at the potential expense, but the confusing and constantly expanding Army wardrobe for upscale social events:

Of course, some denizens of the naval service had opinions:

Marines Stage Whisper: "How many uniforms has the Army gone through while ours remained the same?"

…but will approve methinks. https://t.co/mQEHzrH6IO

While at least one sailor feels that, in the race to look cool in uniform, the sea service is stuck in a stern chase:

So the Army gets to bring back their best uniform and the Navy doubles down on ridiculous ocean camo and Sea Army uniforms, awesome https://t.co/1xsB609TWV

It's natural to want to go for the nostalgic, movie-ready look of the World War II, “greatest generation” Army. Beyond aesthetics, those guys wrapped their war up in less than four years! Maybe there's some of that martial magic left in those military pink slacks.