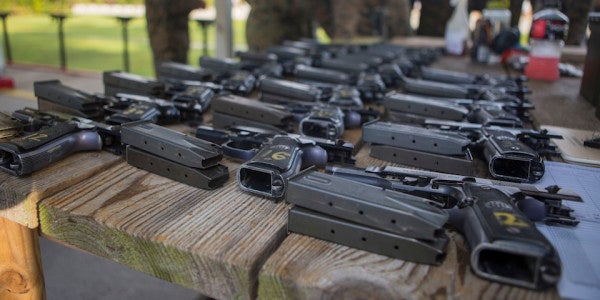 The U.S. Army has dropped Smith & Wesson from its Modular Handgun System competition, according to a Sept. 23 report Smith & Wesson Holding Corporation made to the U.S. Securities and Exchange Commission.

Smith & Wesson, which was partnered with General Dynamics, was one of five gun makers competing to replace the Army’s M9 9mm pistol.

“We and our partner in the pursuit of the U.S. Army’s Modular Handgun System, or MHS, solicitation to replace the M9 standard Army sidearm have been notified by the Department of the Army that our proposal was not selected to advance to the next phase of the competition,” according to the SEC report.

TheFirearmBlog.com was the first to report the news about Smith & Wesson.

As far as we know, the Army is still evaluating striker-fired pistols from Glock, Sig Sauer, Beretta and FN Herstal, according to a source familiar with the competition.

Related: These Firearms Manufacturers Represent The Top Competition For The Army’s New Handgun »

It will be interesting to find out why Smith & Wesson didn’t make it to the next round of MHS.

“We are assessing our options in response to the notification and remain focused on achieving our long-term strategy of organically and inorganically expanding our product offerings in the consumer market for shooting, hunting, and rugged outdoor enthusiasts,” Smith & Wesson officials said in the SEC report.