Sig Sauer is offering a limited number of surplus M17 pistols originally fielded by the Army, the company announced on Wednesday 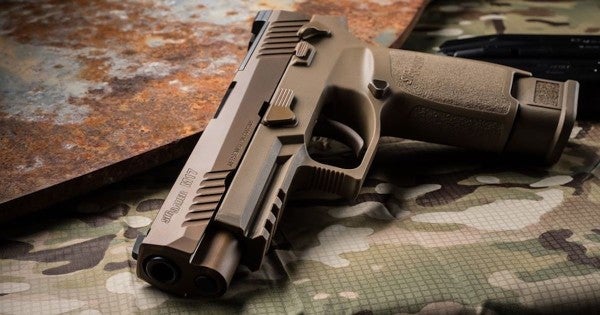 Sig Sauer is offering a limited number of surplus M17 pistols originally fielded by the Army, the company announced on Wednesday.

The 9mm pistols, based on Sig Sauer's P320 and originally adopted by the Army under the Modular Handgun System program in 2017, were originally issued by the Army and fielded during the initial domestic and in-theater deployment of the MHS.

“The M17 Military Surplus handguns are a very special release from Sig Sauer, that gives consumers the opportunity to own a piece of history, and includes a certificate of authenticity,” said Sig Sauer vice president Tom Taylor told Guns.com.

The cache of surplus pistols include the original coyote controls, government-issue marking and serial numbers, as well as the Army's standard front and rear sights.

“As these were fielded by the U.S. Army their condition will vary, making each one uniquely different, and making this truly an opportunity to own a piece of history,” according to Sig Sauer.

Sig Sauer's announcement comes on the heels of the October delivery of the company's 100,000th M17/M18 handgun to the U.S. military.