For the last century, the armored vehicles that have trundled onto mine-laden battlefields have all faced the same inherent trade-off:... 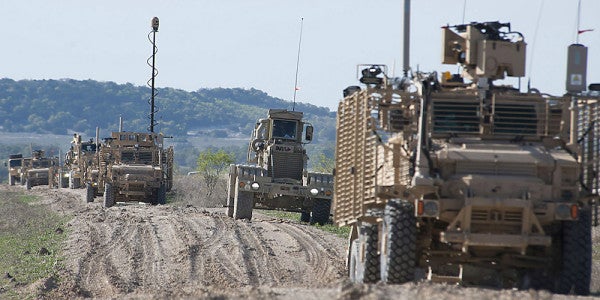 For the last century, the armored vehicles that have trundled onto mine-laden battlefields have all faced the same inherent trade-off: A M1A2 Abrams tank crew can withstand blast after blast while surrounded by depleted uranium mesh-reinforced composite armor, but what they gain in protection they sacrifice in visibility.

A small group of Army engineers is working overtime to make this unfortunate fact of armored warfare an artifact of the past.

The Army is currently testing a next-generation video-display system designed to offer “complete visibility” to a buttoned-up crew by integrating the video and sensor feeds from individual operator stations into a single, unified display, the branch announced on Oct. 27.

The system, dubbed the Multi-Functional Video Display (MVD), is enjoying operational tests on the Medium Mine Protected Vehicle (MMPV) Type II with soldiers in the 509th Engineer Company, 5th Engineer Battalion, 36th Engineer Brigade at Fort Leonard Wood, Missouri. (The MMPV itself has enjoyed testing at Fort Hood, Texas, for more than a year.)

Development of the MVD began two years ago in the Army’s Research, Development and Engineering Command’s Communications-Electronics Center to improve crew visibility in armored vehicles tasked with explosive-ordnance disposal.

“Each Soldier can only see what that sensor displays, requiring him or her to alert the rest of the team to what they see,” Sean Jellish, the lead engineer on the MVD program out of Fort Belvoir, Virginia, wrote in July 2015 at the beginning of the display’s development. “But wouldn’t it be better if the rest of the team could see that information too, rather than just hear about it?”

The Army Acquisition Support Center offered gritty details on the system in a 2015 issue of Army AL&T; magazine:

The MVD system efficiently distributes images and sensor control to all crew stations within a vehicle, resulting in a single touch-screen display for each crew station capable of viewing and controlling all vehicle enablers, and creating a seamless common interface across all enablers. This allows capability growth without increasing display size, weight and power (SWAP) requirements…

Previously, full-motion video could only be viewed by a single crew member with the enabler’s dedicated display. With MVD, any crew member can view video from any or all enablers simultaneously and in real time. With additional eyes on each video feed, situational awareness increases proportionally. Finally, the single integrated MVD system obviates the need for dedicated processing and display hardware, reducing SWAP requirements.

View of the new Multi-Functional Video Display (MVD), as displayed inside of the Medium Mine Protected Vehicle (MMPV) Type II.Photo via DoD

The Army intends to field the MVD downrange as soon as possible: On Oct. 9, Genel Micro Systems announced it had secured an $88 million contract to provide four essential electronic components for the MVD server and video systems over the next three years. At Fort Leonard Wood, Army engineers are hustling to ensure the MVD works properly before a firefight.

“We are also collecting data on the reliability, availability, and maintainability of the MVD, so that we can identify any issues causing malfunctions of hardware failure now, rather than after fielding of the equipment,” Heidi Watts, chief of U.S. Army Operational Test Command’s Maneuver Support Test Division, said in an Army release. “Planning so far out ensures the test includes exercises composed of both day and night mine clearing operations, which equates to providing the most realistic missions and threats.”