Your wingman is your boy, your best friend, your partner, and your comrade in arms, ready to have your back … Continued 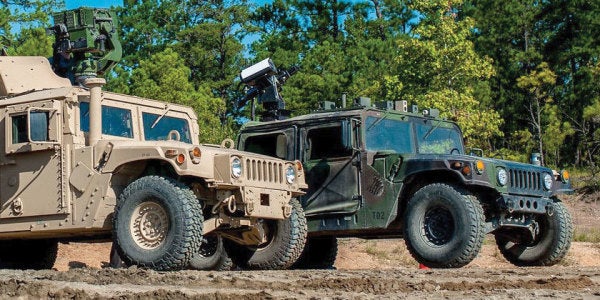 As part of the Army Tank Automotive Research, Development and Engineering Center’s “Wingman” Joint Capability Technology Demonstration, engineers are working overtime to “qualify an autonomous combat vehicle on a gunnery range in the coming month.” Sure, the branch has been working to better mesh robotic assets with ground forces downrange for years. But this $20 million program aims to produce an autonomous battle-wagon capable of enhancing ground forces’ lethality and range in the next three years.

“Obviously if you're a kilometer away from your vehicle, jams are not good,” program deputy chief Thomas B. Udvare said in an Army statement on Jan 31. “What's nice about their electrically-driven system is that the incidents of jamming are greatly reduced.”

“You're not going to have these systems go out there like in The Terminator,” Udvare said. “For the foreseeable future, you will always have a soldier in the loop.” Which, well, good, because no way I’m leaving a wingman alone, no matter how metal and car-shaped he may be. I mean, have you seen Knight Rider? Jesus.

When soldiers might see their new wingman bound over horizon, like virtually all other complicated weapons systems, remains to be seen: According to the Army, engineers plan on taking the platform for a spin on the Scout Gunnery Table VI course, normally used to qualify ground combat vehicles teams for more complicated exercises — a milestone Udvare described as “a beginning point to start to assess these platforms and drive technology.”