Any good firearms enthusiast knows that fully automatic weapons are heavily regulated in the U.S., making it hard to own... 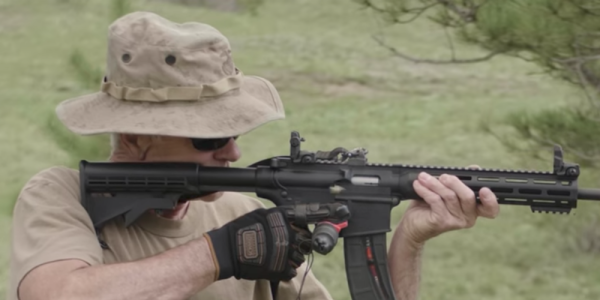 Any good firearms enthusiast knows that fully automatic weapons are heavily regulated in the U.S., making it hard to own anything the federal government might classify as a “machine gun” under the National Firearms Act of 1934. So what’s a marksman to do in those few situations where you really, really need to unleash a hailstorm of bullets with just one squeeze of a trigger?

That’s where the ludicrously named AutoGlove, brought to our attention by Guns.com, comes in. Billed as a “trigger actuation device” that doesn’t permanently attach to a firearm (not unlike the MA Loader, which is designed to circumvent recent California rifle-magazine restrictions), the bulky glove translates a single shot into several pre-programmed fire rates, from the 3-round burst to full-auto mayhem. The goal is simple: less work, more fire.

The folks at AutoGlove USA say the military veterans they recruited to design the handy gauntlet studied the 1934 NFA extensively, and the conclusion they came to was simple: So long as the drill motor that does the bulk of the work in the AutoGlove does not formally “attach” to the stock of a firearm (as prohibited by the Bureau of Alcohol, Tobacco, Firearms and Explosives), the simulation of automatic fire doesn’t violate the letter of the law. After all, you can’t outlaw the fastest hands in the West just for being fast.

“The idea is not to thumb our nose at the Federal Government,” the company says on its FAQ page. “Our intent is to comply with the existing laws and make an accessory that can be used on firearms (since our product was submitted for patent for various products to include firearms) and create a fun experience for the shooter.” (The ATF has not yet weighed in on the AutoGlove with an official opinion letter clearing the product for release, as it usually does when a full-auto-style mod goes to market.)

Hardcore shooters may see the AutoGlove as a cop-out — why not just work hard to build up your reflexes and hand-eye coordination like a goddamn champion??? — but it’s certainly a great example of the firearms innovations triggered by recent gun restrictions.

The AutoGlove is available for pre-order for $299 with an inaugural September production run and an expected delivery period starting in October.