A Bag Made For War And The Chaos Of Everyday Life

The Punisher himself carries a GORUCK GR1, so you automatically know that there has to be something uniquely badass about... 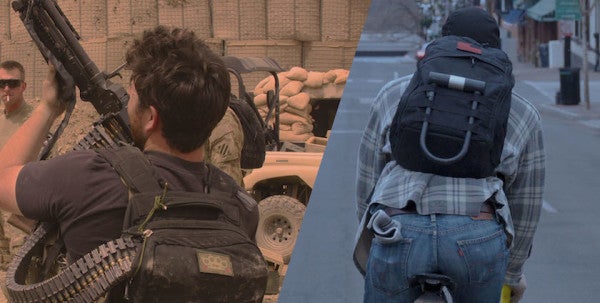 The Punisher himself carries a GORUCK GR1, so you automatically know that there has to be something uniquely badass about this brand. The all-American, all-weather, all-climate GORUCK bags are fiercely loved by so many military members — especially those within the Special Forces community — and have been lauded by The Washington Post, Men’s Health, The New York Post, and The U.S. Army. But when I tested out the GORUCK GR1 and GR2 for Task & Purpose, I found that the bags aren’t just made for the Rambos and Frank Castles of the world — they’re bags for everyone, and can be used anytime, anywhere due to the bags’ sleek and minimalist style, comfort, durability, and practicality.

GORUCK was founded by Jason McCarthy, a U.S. Army Green Beret, in 2008. On the website, McCarthy says that as a company, GORUCK is “based in every way on the lessons I learned in community, both in training and in war.” In 2010, GORUCK held its first-ever GORUCK Challenge, which the company describes as being an event of “teamwork, leadership, camaraderie, smiles, and a gut-check worthy of Special Forces training.” The GORUCK bags — which are strong, durable, versatile, and timeless — are a testament to the company and its community.

Related: This Indestructible iPhone Case Is Built For Battle »

GORUCK fanatics often gush about the merciless beatings that their bags go through over time — both throughout their military careers and within their personal lives. I tried and tested some of these claims, and found that after a month and a half of intense usage, the bags looked brand new — not a stitch ripped or a strap weakened by time or tribulation.

I’m no expert on gear, but have blown through countless bags in the past decade because I heavily use and abuse my things.

When I say use and abuse, I don’t mean that lightly. I’m a frequent traveler and daily commuter, and unlike a normal person who fits that description, I don’t stop and think before I put my possessions through absolute hell: I toss, drag, shove, cram, yank, and overload my bags with reckless abandon. I’ve destroyed ruggedly sturdy leather goods and high-quality nylon materials alike, and had all but given up on my search for a bag that could withstand the forces of my nature. Enter GORUCK, the answer to all of my needs.

The GR1 and GR2 are both made with “Special Forces grade materials,” the website reads, as they were designed specifically to withstand all of the harshness and traumas of war. The GR1 and GR2 are the superhero versions of your average bag: They’ve been tried and tested in military-spec submersion tests, which means that they are highly water resistant. Made with YKK zippers that have silent, glove-friendly zipper pulls constructed from parachute 550 cord — they’re quiet and stealthy. The bags also have the best, and the toughest laptop storage ever built — it's even bomb-proof. “Because GR1 always had to thrive in Baghdad, and in NYC. And it does,” GORUCK adds.

Comfort is one of the best things I’ve found about GORUCK bags. The shoulder straps and top handle are extra padded to carry heavier loads more comfortably. Plus, they’re more durable than any other bag I’ve tried. With high stress points that are strength tested at over 400 pounds, GORUCK bags are capable of holding more weight than anyone should ever ruck with.

As someone who has suffered back, neck, and chest injuries, the GR1 and GR2 have been the only bags I’ve ever owned that don’t make my commute an actual pain. But don’t take my word for it — these bags have been used by Green Berets during war, at over 3,000 GORUCK Challenges, and in major cities around the world, by tens of thousands of people, according to the GORUCK website.

The GR2 is more of a travel bag than the GR1, which is suitable for daily commutes. It’s designed to fit into airline carry-on space and has an impressive 40 liter capacity. Like the GR1, it lays flat for packing but can be stuffed with an unbelievable amount of stuff. It’s heavy, but the weight is worth it when you consider the extreme durability. Using this as a daily commuter would probably be overkill, but if you’re looking to travel light and rely solely on one bag, the GR2 is a dream. Inside organization isn’t as intuitive as the GR1, but there are enough pockets to separate your stuff and keep everything organized. The GR2 will not only hold all your belongings, it’ll take you through hell and back. On the GORUCK website, founder McCarthy says, “If you’re going to travel the world with one ruck, GR2 is the ruck for you. If you can find a laundromat you can live out of this thing literally forever.”

STYLE: Minimalistic. Versatile. Lightweight. Timeless. Army authorized. Can be used as a rucksack, travel bag, all-day bag, or even a diaper bag.

GORUCK is highly durable and supremely comfortable, but the bags also seamlessly fit in with every kind of wardrobe. They’ve passed the cutthroat Manhattan style test — we’ve rocked them in everything from suits and dresses to T-shirts and silkies, from the subways to the streets of SoHo.

For commuters in urban environments especially, it can be hard when you have to carry everything with you everywhere. The bag has to be comfortable, as commuting on public transportation can be a little like rucking. It has to travel and stow well, as we frequently take the subway, bus, or train. It has to look good with whatever we’re wearing, from a suit and tie to a T-shirt and jeans. It has to withstand the bedlam inside of a shoulder-to-shoulder bar for happy hour after work, and it needs to have room to fit a good-sized laptop.

Urban environments can be simultaneously rough and classy — something that most companies can’t quite accommodate in their product design. Yet the GR1 and GR2 are highly compatible with these kinds of lifestyles, and all of these different environments.

Some of us have dogs and children, and we need a bag that can both withstand and accommodate our chaotic lifestyles. I personally have a 10-month Rhodesian Ridgeback that didn’t make a dent in my GR1. It’s easy to clean. It’s conveniently water resistant, and from what I can tell based on storing my nasty gym shoes all day, stink resistant.

Price: High, but worth it. The bags come with a lifetime guarantee — meaning you may never have to buy another bag again. GORUCK isn’t marketing to your average Joe — the products are for those who demand more and are willing to pay for it.

With an overwhelming 95% five-star reviews, this bag is clearly worth the extra bread.