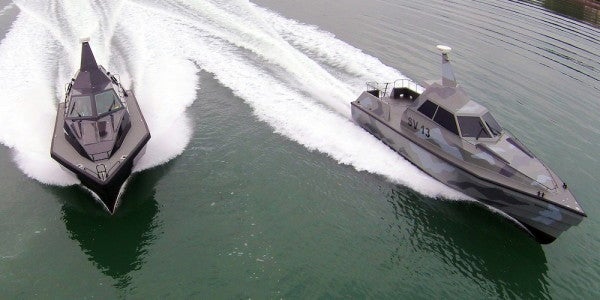 But while SOCOM has lauded the lovely speedboat as a “modern, clandestine, agile, adaptive, and operationally capable maritime craft,” new footage of defense contractor Safehaven Marine’s much-hyped new interceptor, well, blows the CCA clean out of the water. On Sept. 28, Seahaven Marine posted a brief video of its much-anticipated Barracuda interceptor craft conducting high-speed boarding trials alongside an Irish Navy vessel, cruising alongside the target craft at a blistering 20 knots:

In development since 2013, the Barracuda was engineered specifically for subterfuge with an extremely low radar cross section, operating with “a very significantly reduced degree of visibility to an adversary’s radar” through radar-reflective paneling and a unique below-decks design, according to the company. With a capable maximum speed of more than 40 knots and space for up to 16 crew, the Barracuda is certainly an appealing craft for force projection and security. And she certainly packs a wallop, too, rocking either a remote-controlled, gyroscopically-stabilized 12.7mm machine gun or a manned motorized 7.62mm gun turret concealed below decks.

Layout of the 11m, low-RCS Barracuda

When Seahaven Marine first unveiled the Barracuda in 2015, the company announced its intent to market the sleek new interceptor to NATO-aligned naval and law enforcement agencies. And while the company has only publically announced deliveries of the Barracuda to the Port of Pool Harbor and maritime solutions firm P&O Maritime, the jet-black military-style iteration of the vessel would look damn good flitting alongside an Arleigh Burke-class missile destroyer.

SOCOM may choose to stick with the CCA for the immediate future, but perhaps the vessel can help fill the gap that made the half interceptor, half submersible HyperSub so appealing during the Navy and Marine Corps’ Ship-To-Shore Maneuver Exploration and Experimentation Advanced Naval Technology Exercise 2017 back in April.

Task & Purpose has reached out to CENTCOM to see if Gen. Votel loves this stealth boat as much as the CCA.