Believe It Or Not, This Is An 1,000-Year-Old Hand Grenade

In 1973, an Israeli power plant worker named Marcel Mazliah began collecting artifacts he found in the Mediterranean. Following his... 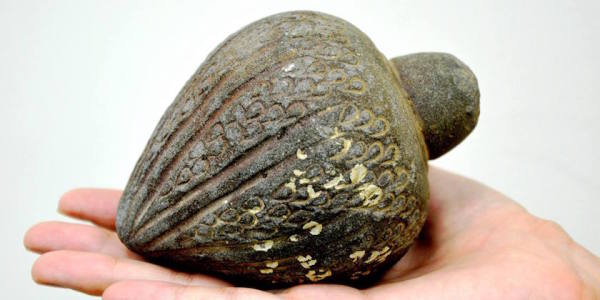 In 1973, an Israeli power plant worker named Marcel Mazliah began collecting artifacts he found in the Mediterranean. Following his recent death, Mazliah’s family handed over his extensive collection to the Israel Antiquities Authority. Among the haul, which included objects dating back more than 3,500 years, was an ancient hand grenade.

Hand grenades are generally thought of as byproducts of the modern battlefield, but, in reality, people have been using small, throwable bombs in combat since the 8th century. During the Crusades, which began in the 11th century and lasted until the 13th century, hand grenades filled with either petroleum, naphtha, or Greek fire were commonly used by Islamic forces in Israel. Israel Antiquities Authority believe that the grenade, as well as the other objects in Mazliah’s collection, had probably fallen overboard from a medieval metal merchant’s ship en route to Israel from Syria.

“The items were apparently manufactured in Syria and were brought to Israel,” Ayala Lester, an Israel Antiquities Authority curator, told Fox News. “The finds are evidence of the metal trade that was conducted during this period.”

Most people are familiar with time-delay fragmentation grenades, which debuted on the battlefield around the turn of the 20th century, and have played a major role in virtually every major conflict since. Made of serrated cast iron and filled with explosive material, the grenade’s firing mechanism is triggered by a spring-loaded striker held in place by a lever. Once the lever is released — i.e., when the grenade is thrown — the striker hits a percussion cap, creating a small spark that ignites a fuse connected to the detonator. Several seconds later, boom.

There’s little information about the embossed, acorn-shaped grenade Mazliah found off the coast of Israel; however, an article published on The History Blog theorizes that it is made of unglazed ceramic. Like a Molotov cocktail, a soldier would’ve lit a wick and either tossed or catapulted the grenade with the intent of setting fire to his enemy or his enemy’s surroundings. Once the flame made contact with whatever flammable liquid had been poured into the vessel, it would have “exploded fire that water could not put out.”