Dick's Sporting Goods will no longer sell assault-style rifles at any of its stores and will ban the sale of... 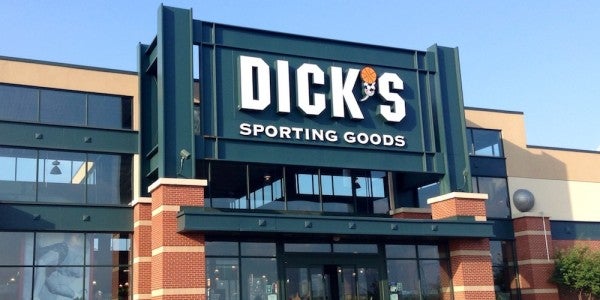 Dick's Sporting Goods will no longer sell assault-style rifles at any of its stores and will ban the sale of guns to anyone younger than 21, the company announced today.

The ban will extend to high capacity magazines and the company pledged to never sell bump stocks that allow semi-automatic weapons to fire more rapidly.

The decision was announced in a letter from Dick's Chairman and CEO Ed Stack. The new measure goes into effect immediately.

Dick's previously removed assault-style rifles from its stores in the wake of the 2012 shooting that left 26 dead at Sandy Hook Elementary School in Newton, Connecticut. The new measure will include its 35 Field and Stream branded stores as well.

The move comes after gunman Nikolas Cruz allegedly killed 17 people at Parkland, Florida's Marjory Stoneman Douglas High School. Cruz, 19, had purchased a shotgun legally at Dick's in 2017, the company confirmed, but it was not the firearm used in the massacre.

The move has prompted a swift reaction from Dick's customers, some of whom are vowing to boycott the sporting goods retailer.

Stack's letter already has more than 28,000 comments on Facebook.

“I will never set foot in your store again,” one commenter said.

“You are well within your rights to do this,” another commenter added. “Unfortunately, by missing the true problem I must use my rights to never shop….at your store again. By pointing to this problem, you are not focusing on the mental health problem. You are blaming an inanimate object and are not solving anything. You are simply making a fake stand and hope the publicity increases your bottom line. I wish you luck. Let's see how capitalism rewards you.”

We at DICK'S Sporting Goods are deeply disturbed and saddened by the tragic events in Parkland. Our thoughts and prayers are with all of the victims and their loved ones.

But thoughts and prayers are not enough. We have tremendous respect and admiration for the students organizing and making their voices heard regarding gun violence in schools and elsewhere in our country.

We have heard you. The nation has heard you. We support and respect the Second Amendment, and we recognize and appreciate that the vast majority of gun owners in this country are responsible, law-abiding citizens. But we have to help solve the problem that's in front of us. Gun violence is an epidemic that's taking the lives of too many people, including the brightest hope for the future of America – our kids. Following all of the rules and laws, we sold a shotgun to the Parkland shooter in November of 2017. It was not the gun, nor type of gun, he used in the shooting. But it could have been.

Clearly this indicates on so many levels that the systems in place are not effective to protect our kids and our citizens.

We believe it's time to do something about it.

Beginning today, DICK'S Sporting Goods is committed to the following:

We will no longer sell assault-style rifles, also referred to as modern sporting rifles. We had already removed them from all DICK'S stores after the Sandy Hook massacre, but we will now remove them from sale at all 35 Field & Stream stores.

At the same time, we implore our elected officials to enact common sense gun reform and pass the following regulations:

We hope others join us in this effort to let our kids know that their pleas are being taken seriously. Some will say these steps can't guarantee tragedies like Parkland will never happen again. They may be correct – but if common sense reform is enacted and even one life is saved, it will have been worth it.

We deeply believe that this country's most precious gift is our children. They are our future. We must keep them safe. Sincerely,