A Brief Glimpse At The Use Of Robotics In Warfare

Every year it seems like more and more of what we once considered science fiction is giving way to reality.... 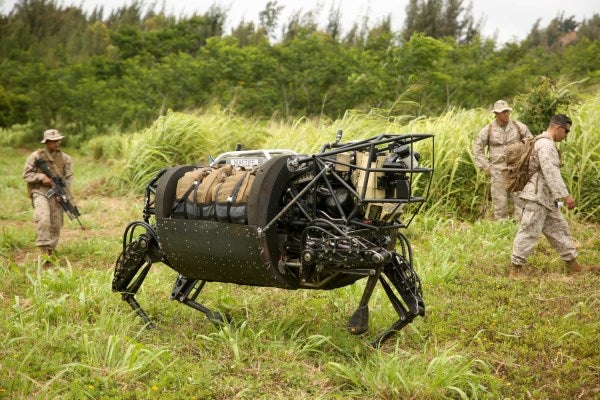 Every year it seems like more and more of what we once considered science fiction is giving way to reality. The Navy is developing rail guns, and nobody bats an eye at unmanned aerial vehicles. Governments even use robots for rescue operations. As we near a time when robotics may become commonplace in the military and civil services, let's take a look at some of the technologies.

The “Sally B” B-17 Flying Fortress bomber aircraft flies overhead during the Memorial Day ceremony held at the Madingley American Cemetery near the city of Cambridge, England, in honor of the World War II fallen, May 31, 2004. Photo by Staff Sgt. Tony R. Tolley.

Operation Aphrodite: An early attempt at aerial drone technology during World War II, Operation Aphrodite was a U.S. military operation and a catastrophic failure. The plan called for stripping down B-17-flying fortresses and loading them to the brim with explosives, at which point, a skeleton crew would take off, because the radio-controlled system wasn’t sophisticated enough to do it on its own. After the crew reached a safe altitude, they would jettison the plane, and an aircraft trailing behind would remotely fly the bomber into an enemy position, like some bloated pigeon with a suicide vest and a death wish.

The program was combat tested, meaning that while the pilot and flight crew were working out the kinks in the system, they had to contend with real-world dangers like anti-aircraft fire and Luftwaffe squadrons. Tragically, Operation Aphrodite ended up killing more Americans than it did enemy combatants; among them was Joseph P. Kennedy, Jr., older brother to John F. Kennedy.

The Teletank: Russia showcased its radio-controlled teletanks when it fought against Finland during the Winter War, at the outset of World War II. The tanks, which were built on the chassis of T-17 and 18 tank models had weapon mounts that could field machine guns, flame throwers, or smoke canisters. They could carry bombs that they would drop off in front of enemy positions, like pillboxes, and were even capable of carrying and deploying chemical weapons, but thankfully they were never actually used for that purpose.

The tanks could be programmed to understand up to 24 different orders via radio from a nearby command tank. The idea was that a commander would send his teletanks forward while the radio operator and tank crew hung back and let their Red Army doom-bots wreak havoc on the enemy. Though initially successful against Finnish forces, the teletank’s usefulness ran dry as World War II began. Its thin armor and lack of firepower couldn’t stand the assault of larger, more powerful German tanks.

Explosive ordnance disposal robots: The father of all bomb-disposal robots, the Wheelbarrow, was developed in 1972 to help British soldiers deal with the threat of improvised explosive devices in Northern Ireland. Lt. Col. Peter Miller came up with the idea in 1971 when the Royal Army Ordnance Corps suffered severe casualties due to IEDs, usually in the form of car bombs. Known for being both a maverick and eccentric, Miller modeled the robot after a previous invention, his lawnmower.

Miller jerry-rigged a lawn mower to run remotely and ran a length of rope from the mower to a stake in the center of his yard so it would run in circles, slowly moving inward as the rope wrapped around the stake, this way he could enjoy a cocktail while a robot mowed his lawn.

Using a similar logic, Miller fashioned the first explosive ordnance disposal robot out of a motorized wheelbarrow. Personnel would affix tow cables to a suspected bomb, and attach the other end to the Wheelbarrow robot. This way, the robot could drag the vehicle a safe distance where, if it did explode, there would be minimal damage to civilian or military personnel.

Descendents of the Wheelbarrow are still used by British bomb-disposal teams and are credited with saving hundreds of lives, with more than 400 of the robots having been destroyed in the process.

The Robotic Mule: The Legged Squad Support System, or LS3, looks ridiculous, really. It’s a headless robo-horse. That being said, I’m an advocate for anything that can go where Marines go and is willing to carry all of our heavy crap without complaint.

This mechanized beast of burden allows troops to show up unladen, fresh, and ready to fight. It offers a distinct tactical advantage for forces deployed to areas where they are required to routinely cover large swathes of territory. The LS3, commonly referred to as the mule, is capable of carrying up to 400 pounds of equipment and righting itself when it falls over. However, it can only traverse 80% of terrain that Marines on foot can and the loud noises it makes prevent it from being used for anything remotely stealthy. That being said, I’m sure many Marines would have considered it a welcome addition to their patrols through the flat ground, farmland notwithstanding, and long stretches of road in Helmand province.

Octavia: This eerie egg-faced robot can understand oral commands and follow instructions. A product of the Naval Research Laboratory, with support from the Office of Naval Research, Octavia may look creepy, but she’s as futuristic as it gets. This robot is able to react to hand signals and oral commands and was designed as an emergency response system for fires and similar crises aboard naval vessels where heat and smoke in small enclosed spaces can incapacitate or kill before sailors can put a stop to it.

I do have one recommendation before they put Octavia into the fleet, that face has to change. I think I’d run the opposite way if I saw her rolling slowly toward me through a haze-filled corridor, but maybe that’s just me.

With a research grant from the DoD, Berkeley Bionics unveils their third generation exoskeleton, the HULC, or Human Universal Load Carrier.Photo courtesy of Ekso Bionics

EXOSkeletons: The idea of suiting up in a steel-plated, rocket-boot, death machine is all the rave right now, and with good reason: It’s cool as hell. Unfortunately, exoskeleton technology isn’t at that point yet, but that doesn’t mean it’s any less impressive. Ekso Bionics is one of several companies developing a system that allows individuals suffering from spinal injuries or other lower extremity disabilities to walk again. That merits repeating. It allows people to walk again, and that is simply amazing, not just for wounded service members, but for anyone who has suffered a debilitating injury.

Additionally, other companies like Raytheon and Lockheed Martin have been developing systems for military service, with the most recent application being in manual labor. Think of the movie “Aliens” and that giant yellow walker that Ripley gets in at the end. Yeah, that’s where we are. Not as sexy as “Pacific Rim”-style battles, but still really sweet if you draw the short straw for a working party and have to move a ton of sandbags.