The Tactical Case For The Flamethrower, According To A Vietnam War Vet

No weapon wielded by combat troops during the global conflicts of the 20th century so viscerally embodied the brutality of... 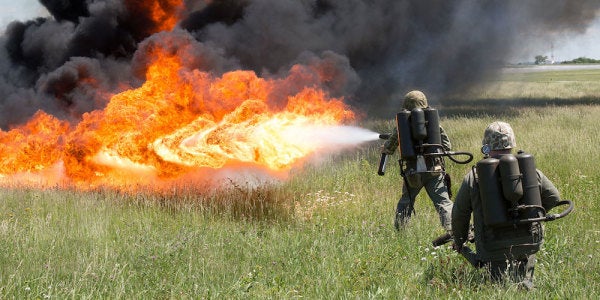 No weapon wielded by combat troops during the global conflicts of the 20th century so viscerally embodied the brutality of total war than the flamethrower. Though an infrequent guest in military arsenals dating back to the ancient Greeks, the first modern-man immolation cannon appeared in hands of German soldiers as the Flammenwerferapparaten during World War I. German troops debuted the weapon in 1915 during a clash with Allied forces near Malancourt, France, during the Battle of Verdun, during which British military leaders reportedly labeled the flamethrower “an inhuman projection of the German scientific mind” — a sinister, sadistic tool of wanton destruction.

But that didn’t stop the flamethrower from entering widespread use during World War II, when the U.S. Army and Marine Corps adopted the variants on the U.S. armed forces’ M1 and M2 flamethrowers, mostly to clear out Japanese troops dug into strategic terrain across the Pacific. FM 20-33 Combat Flame Operations, the services’ Vietnam-era combat manual for incendiary operations, stated that the flamethrower should be considered “a valuable close combat weapon that can be used to demoralize troops and reduce positions that have resisted other forms of attack,” as Marine Corps Capt. N. T. Perkkio wrote in a 2005 briefing arguing for their return to the battlefield in the wake of the Global War on Terror:

The greatest advantage of the flamethrower is its ability to penetrate small openings and fill fortified positions with both fire and smoke. Thus, the enemy either burns or asphyxiates due to the lack of oxygen available to breathe. In the urban environment, the flamethrower can shoot fire around corners to enhance movement past dead or blind angles. Besides causing death and destruction, the flamethrower can greatly impact an enemy psychologically. According to several historical examples, the enemy normally surrenders before submitting themselves to a flame attack. They would rather be captured than burned.

While the Defense Department ramped up research on both man-portable and vehicle-mounted incendiary weapons following World War II, the system fell into disfavor during the Vietnam War as horrifying imagery like “Napalm Girl” — the 1972 Pulitzer Prize-winning photo of a naked 9-year-old girl fleeing after surviving a napalm attack — turned the American public against incendiary weapons. DoD issued a directive in 1978 effectively retiring the weapon from battlefield use.

“The thought was that, well, flames set people on fire, and we were going through the nice-nice phase of our foreign policy and our national security policy and everybody wanted to be nice,” retired Army Lt. Col. Charles Krohn, a former senior defense official and author ofThe Lost Battalion of Tet, told Task & Purpose. “Setting people on fire seemed unnecessarily cruel; it was an emotional reaction rather than practical.” Indeed the flamethrower wasn’t a tactical priority after Vietnam, says Krohn: “Nobody was worried about close combat; we were dealing with Soviets, at a distance, with nukes.”

But the ethical issues regarding the cruelty of the flamethrower doesn’t make its return to the battlefield an impossibility: Although Protocol III of the Convention on Certain Conventional Weapons bans the use of incendiary weapons against civilians outright, it only prohibits their delivery by air against military targets “located within a concentration of civilians,” suggesting that man-portable incendiary weapons appear permissible when a military objective “is clearly separated from the concentration of civilians and all feasible precautions are taken” to avoid civilian casualties. “The use of weapons that employ fire, such as tracer ammunition, flamethrowers, napalm, and other incendiary agents, against targets requiring their use is not a violation of international law,” a 2003 Army field manual states. “They should not, however, be employed to cause unnecessary suffering to individuals.”

This means that, tactically, there are several potential applications of the flamethrower to modern counter-terrorism operations. But while the branch considered returning the weapon to the branch’s arsenal for defense purposes in the early years of the Global War on Terror, the enduring notoriety that has followed incendiary weapons since napalm his the battlefields of Vietnam has, to Krohn, deprived combat troops of an essential force protection tool.

“I have never spoken to an active-duty soldier involved in close combat that wouldn’t want all the protection that science and technology can make available,” he told Task & Purpose.

Krohn would know: During the Tet Offensive, his battalion was surrounded by a North Vietnamese army regiment during the Battle of Huế in February 1968, leaving Krohn as one of the only survivors. Had his team been equipped with an overwhelming, far-reaching incendiary for force protection, he told Task & Purpose, the outcome might have been different. In The Lost Battalion of Tet, Krohn recalls two simultaneous NVA attacks on U.S. military outposts on Jan. 3, 1968 that both offered lessons in incendiary warfare: LZ Leslie, attacked by NVA fighters outfitted with flamethrowers “with great effectiveness,” overrunning the location after a 12-hour siege and “offering a lesson in terror survivors tend not to forget.” The other, at LZ Ross, resulted in 242 NVA soldiers dead — and only one KIA among U.S. and allied forces.

Why was the defense of Ross more successful than Leslie? According to Krohn, the soldiers at Ross had enhanced their perimeter with a fougasse — an improvised mortar developed by French military engineers — that consisted of 55-gallon drums filled with thickened gasoline. Each drum was filled with rocks and pointed outward along the perimeter, with a wire running from an igniter on the bottom to a fortified safe point. During a prolonged attack on a firebase outside of friendly artillery range, Krohn says, soldiers and Marines would use the fougasse as a last-ditch defense.

“It’s basically napalm blown outward with terribly destructive power,” Krohn told Task & Purpose. “We used it a lot to protect the firebases I wrote about.” For forward operating bases from Vietnam to Afghanistan that are outside artillery range or lack immediate air support, the improvised napalm is a fine defensive stopgap. “If you want air cover but you don't always have aircraft or drones in the area, what do you do in the extreme short term?” he said. “You fight like and hell and if they get close to the wire, you blow the fougasse.”

The question facing DoD planners regarding the weapon’s return to the battlefield is meshing tactical practicality with international law surrounding incendiary weapons. Though flamethrowers offer an edge over conventional small arms when going up against a fortified structure like a building or bunker rather than the tunnels of Iwo Jima or caves of Afghanistan, the potential for uncontrollable and indiscriminate collateral damage makes them less-than-ideal for prolonged operations in urban terror strongholds like, say Mosul or Raqqa. As Krohn put it: “That flame is not the primary killing device. Suffocation is.”

Luckily, service members won’t need to wait long to get your hands on a flamethrower: In the United States, there are zero regulations, licenses, or background checks required for purchasing or operating a civilian-made tool of incendiary chaos in 48 states. And if all goes according to plan, billionaire tech entrepreneur Elon Musk will have a slick $600 model for you just in time for Christmas.