Brown Jump Boots, Ike Jacket May Be In The Works For New Army Greens

Editor’s Note: This article by Matthew Cox originally appeared on Military.com, a leading source of news for the military and veteran... 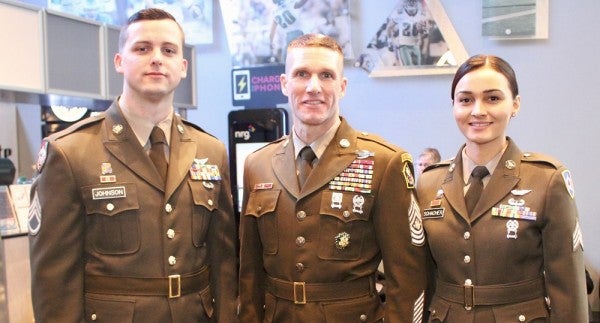 The U.S. Army is considering having paratroopers in airborne units wear World War II-style brown jump boots with the new Army Greens instead of the black boots they currently wear.

“We have discussed that; we don't have them done yet, of course,” said Sergeant Major of the Army Daniel Dailey. “We've got to make prototypes and show them to [Chief of Staff of the Army Gen. Mark Milley] for a decision.”

Since the first airborne units were formed during World War II, Army paratroopers have bloused their spit-shined jump boot in the trousers of their Class-A and Class-B uniforms.

The tradition will likely continue with the new Army Greens, Dailey said.

“The intent is to still allow the airborne soldiers to wear jump boots and … it's not approved yet, but the intent would be to show the chief of staff of the Army brown prototypes.”

Dailey's comments to reporters at the Pentagon on Monday came eight days after the service announced the adoption of the Army Greens — a new Class-A/Class-B uniform designed after the iconic pinks-and-greens uniform soldiers wore during World War II.

The current blue Army Service Uniform will become the service's optional dress uniform once the Army Greens becomes mandatory for wear in 2028.

The new uniform will feature a green jacket, taupe-colored pants and brown leather shoes. It will be issued with a garrison cap, but soldiers are also authorized to wear the black beret, Army officials said.

There will also be an optional service cap with brown leather trim that soldiers can purchase, officials have said.

There are other optional items soldiers can purchase as well, Dailey said.

“There are a few different jackets that we are working on right now,” he said.

One of them, Dailey said, is the Eisenhower jacket or “Ike jacket,” a waist-length jacket that was popular in WWII.

“The second one is the tanker jacket, which would replace the black windbreaker, and it is a greenish color,” he said. “And the last one is, which the soldiers love the most, is what we call the World War II bomber jacket, so it's the leather jacket.

“Each one of those would be optional for wear, based upon the type of formation or the commander's input. But if the soldier is traveling around in Class-Bs and wants to put on … a jacket to warm up, a soldier will have that option,” Dailey said.

Army officials did not say when the three optional jackets would be available for soldiers to buy.