If you’ve ever dreamed of rolling up to a stoplight in a Humvee and mean-mugging the cold-brew-coffee-drinking hipster in the... 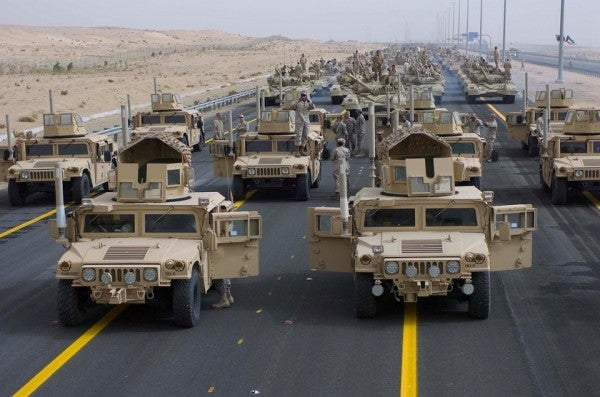 If you’ve ever dreamed of rolling up to a stoplight in a Humvee and mean-mugging the cold-brew-coffee-drinking hipster in the Prius next to you, starting Wednesday, Sept. 7, you can.

Across the United States, 1,300 assorted pieces of military equipment will go up for auction online through GovPlanet, which secured a six-year contract with the Defense Logistics Agency to move hardware that has piled up over several decades. The next weekly surplus equipment auction will feature 429 pieces of hardware, from 1990s-era Humvees that start at $7,000, to dump trucks and tractors that come in around $15,000, according to National Defense Magazine. There’s even some construction cranes that can be purchased for as little as $20,000.

Most of the equipment is in working order, and many of the vehicles have pretty low mileage. Most items sell for between 8 and 10% of their original purchase cost, but it varies. Humvees that plummeted from a C-130 without a parachute will probably be cheaper.

There’s also a random mix of lawn mowers, trailers, forklifts, and piles of tires for sale.

Another auction, exclusively for Humvees, starts on Sept. 13.