Be All You Can Pee: Urine Might One Day Power America’s Wars

It’s one of the first things a soldier learns on deployment: not every water bottle filled with liquid is a … Continued 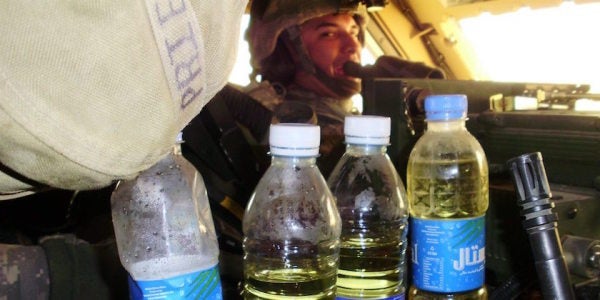 It’s one of the first things a soldier learns on deployment: not every water bottle filled with liquid is a source of healthy refreshment. Some, in fact, are filled with urine — the aftermath of a long mounted patrol or an overnight watch shift. Because, sometimes, there’s simply nowhere else to “go.” Naturally, these “piss bottles” get thrown away. They’re gross.

Soon, however, there might be another option: convert that filthy human waste into clean, efficient fuel.

Scientists at the U.S. Army Research Laboratory at Aberdeen Proving Ground, Maryland are developing a nano-powder based on aluminum, which releases pure hydrogen when combined with any liquid containing water, according to the Army. This is major.

Hydrogen, the most abundant element in the entire universe, has the potential to fuel cells and provide energy that doesn’t cause pollution. In fact, fuel cells are “more energy-efficient than combustion engines,” according to the Department of Energy.

“What we do as Army scientists is develop materials and technology that will directly benefit the Soldier and enhance their capabilities,” Dr. Kristopher Darling, an ARL researcher, told an Army reporter. “We developed a new processing technique to synthesize a material, which spontaneously splits water into hydrogen.”

Turns out, urine contains water (but not the kind you should drink). And not only does it release hydrogen when it comes into contact with this miracle nano-powder, it releases hydrogen at a much higher rate than ordinary H20. Why? The ARL researchers aren’t sure, but they suspect it has to do with the electrolytes and the acidity of that warm liquid gold.

“When we demonstrated with urine, we saw almost a twofold increase in the reaction rates,” Darling said. “We were very excited.”

And they should be. Dr. Philip Perconti, the ARL laboratory director, told the Army that this newly discovered utility for urine could be a game-changer for “forward deployed troops who need a compact and lightweight energy source.”

In theory, soldiers might be able to use their own bladders — and piss bottles — to store fuel to power mission-essential equipment that can’t be easily resupplied, like communications and electronics gear.

The ARL team will continue investigating the implications of their new discovery in the coming months, while also teaming up with other researchers at the laboratory, such as the Sensors and Electron Devices Directorate, to develop ways to harness the nano-powder as a potential energy source.

Imagine the possibilities — not just for troops overseas, but for all of us. There may come a day when we won’t ever have to leave the couch during, say, an overnight Call of Duty marathon or the series finale of Game of Thrones. We’ll just piss into the television. Or, even better, into a diaper that’s connected directly to the TV by some sort of tube.