You Can Unleash Miniature Hell With This Tiny Pocket Cannon

Remember playing with those plastic green army men and making model planes and ships when you were a kid, back... 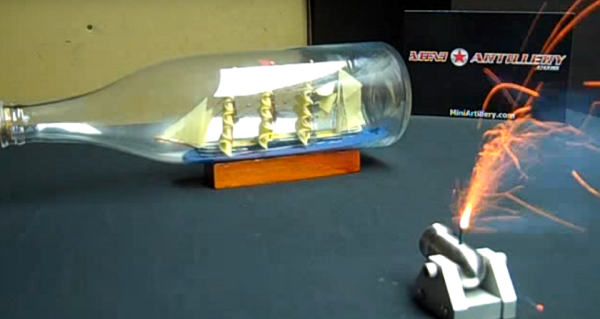 Remember playing with those plastic green army men and making model planes and ships when you were a kid, back when it was still O.K. to do that? That was awesome. Unfortunately, we all grow up, and at some point or other we’re forced to leave childish things behind. Or not.

Thanks to one enterprising company, you can once again play war in your backyard. Except this time, it’s real … kind of.

Called the “mini cannon,” this tiny piece of artillery fits in the palm of your hand and fires a .30-caliber slingshot ball. It’s perfect for decimating wooden model ships, plastic army men, and any glass windows you accidentally hit.

Pocket Cannons, the company behind this miniature dealer of death, describes their artillery as the perfect balance between size and power.

“Our cannons are small enough to fit in your pocket, but powerful enough to destroy anything you put in it's path,” reads the website. The cannons also come with a ramrod, and not two, but three steel balls.

Thanks to this baby, you can decimate hordes of plastic soldiers. Oh, and there’s the added benefit that the next time you tell some girl at the bar you’ve got a cannon in your pants, it’ll actually be true.