Check Out This Futuristic New Stock For Your AR-15

The estimated worth of the United States firearms industry was $13.5 billion in 2015 thanks, in part, to the popularity... 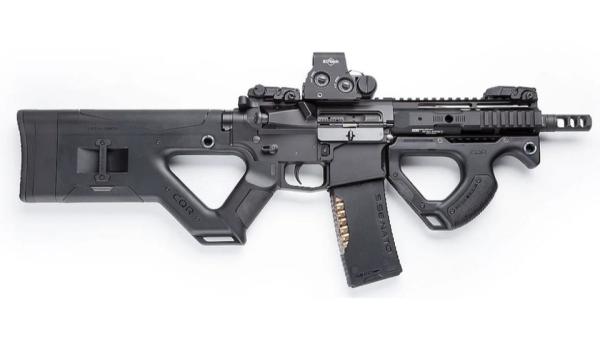 The estimated worth of the United States firearms industry was $13.5 billion in 2015 thanks, in part, to the popularity of firearms accessories. Selling everything from expensive scopes to cheap slings, the accessory industry is made up of hundreds of manufacturers. But what more does the discerning AR-owner need once they have an optic, a rail system, vertical fore grip and the latest milspec stock?

How about a cool futuristic-looking furniture set from Hera Arms:

The furniture appears to have been heavily influenced by the unique FN P90 personal defense weapon, with thumbholes that drastically differ from the standard AR's functional design. Hera claims the stock is easy to install while the foregrip simply fixes to standard Picatinny rails. The company has emphasized that the package of both buttstock and foregrip is ideal for a short-barreled rifle build. This brings the foregrip flush with the rail system and gives the weapon a distinctly compact appearance.

Hera says that the close quarter rifle furniture was developed with both military and law enforcement applications. The stock offers two fixed-sling attachments, as well as a quick-detach point on both sides. The foregrip also has two quick-detach points and a fixed carabineer loop at its base. There's even a section of Picatinny rail hidden under a rail cover at the back of the stock to allow users to mount a monopod for long-range prone shooting.

The Utah-based Hera Arms USA is a subsidiary of a German parent company, HERA GMBH, which has also recently partnered with Stag Arms to sell its stocks and lowers. More importantly, the two are also offering a featureless buttstock that is California compliant. This version has an aluminum plate blocking the thumbhole and a manufacturer's suggested retail price of $124.99.

According to Hera, the CQR furniture will offer users a “lightweight, compact and ergonomic” system. For many shooters weight it everything, the CQR foregrip weighs 4.6 ounces, while the buttstock — which combines the weapon's pistol grip, stock, and buffer tube housing into one assembly — weighs 14.4 ounces.

The CQR furniture is made from reinforced polymer and is available in three colors: black, tan, and OD green. While the CQR stock isn't adjustable like a standard M4-style buttstock, Hera offers aluminium spacers in various lengths. The buttstock has a manufacturer's suggested retail price of $119.00 while the foregrip comes in at $39.00. Hera does not appear to offer a package combining the two parts at this time.

The CQR furniture's unconventional and unusual appearance may turn off some buyers, but with over 12,000 people reportedly on Hera's waiting list for the parts, there is substantial interest in the futuristic-looking new accessory.