Imagine this: After a raucous evening out with friends at your favorite watering hole, you stroll home, only to encounter... 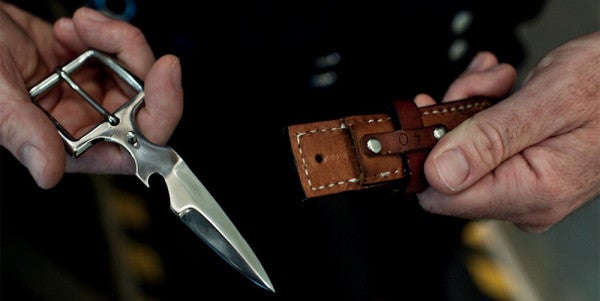 Imagine this: After a raucous evening out with friends at your favorite watering hole, you stroll home, only to encounter a heinous goon dead set on relieving you of your wallet and valuables. It’s not an impossible scenario, sadly: The Federal Bureau of Investigation’s most recent batch of national crime data indicated there were 300,000 robberies in 2015 alone. Violent crime has been on the decline in the US for decades, but the casual mugging is still a sad reality for many Americans.

If you’re the sort of guy who doesn’t relish flaunting a handgun or intimidating-as-hell combat knife at the local bar, there’s a more subtle self-defense option available for your consideration. Our friends at HiConsumption highly recommend the discreetly dangerous concealed Belt Knife, courtesy of the Bowen Knife Company, to keep you safe while you’re out on the town:

The Bowen Knife Belt’s been around since 1969, and with good reason. The stainless-steel buckle-knives aren’t just safe, but relatively stylish in their simple brown and black options. Plus, the Bowen belt (sold separately from the buckle blades, unfortunately) offers an option to stash your cash in its tested Moneybelt. And this doesn’t just apply to a trip to bar: This version of the Bowen’s stabtacular cummberbund might be the best option for world travelers adventuring to less-than-safe locales.

The Bowen is relatively cheap, starting at $40 for the single-edge blade and $50 for the double, with the belts themselves ranging from $35 to $50. Yeah, it’s not as fancy as the $550,000 Roland Iten Calibre R822 Predator belt buckle, but it’ll get the job done — assuming the job involves both keeping your pants up and dealing stabby pain to potential muggers.