This Cyber Rifle Is Dirt Cheap And Easy To Make. Happy Drone Hunting

The war against the machines is pretty much underway. On March 23, during a demonstration at West Point, a U.S.... 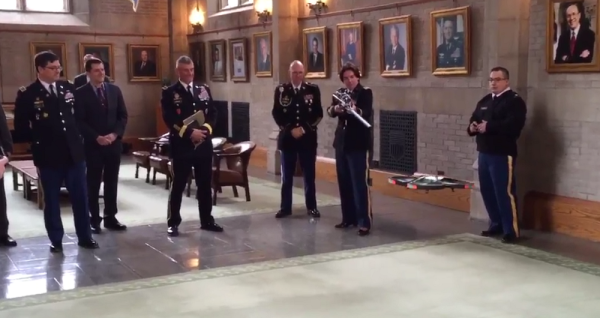 The war against the machines is pretty much underway.

On March 23, during a demonstration at West Point, a U.S. Army soldier shot down an unmanned aerial drone with a cyber rifle. Officially called a cyber capability rifle, it uses an antenna, wi-fi radio, and a cheap computer to take out drones. The rifle targets a known weakness in the Parrot quadcopter, telling the drone to power down, which sends it crashing to the floor, reports Popular Science.

Presumably, the rifle could be designed to target other brands of drones.

According to the Department of Defense Twitter account, which posted a video of the demonstration, Secretary of Defense Ashton Carter was present, just on the edge of the camera’s frame.

Created by the Army Cyber Institute at West Point, the rifle was first demonstrated during an Army exposition last fall.

Related: Blast drones out of the sky with this street-legal bazooka »

It’s not just the rifle’s ability to take down commercial drones that makes it an exciting prospect — after all, any shotgun used at a skeet range could do that — it’s the fact that it cost $150 in parts, was assembled in under 10 hours, and doesn’t use projectiles, reports Popular Mechanics.

The version that appeared at the expo was designed by Army Capt. Brent Chapman, a member of the Strategic Initiatives Group at the Army Cyber Institute. The weapon, which is built from existing information and commercial technology, fits the profile for a new program for the Defense Advanced Research Projects Agency, which asks innovators to create cheap threats and countermeasures.

According to Popular Mechanics, Chapman described the rifle’s creation as an exercise in tactical or expeditionary making, which refers to a soldier’s ability to create needed equipment while downrange.

It’s not often that a countermeasure costs the same as the threat it's designed to thwart. Just think of the price difference between an MRAP and an improvised explosive device. Other drone countermeasures, include street legal bazookas, training eagles to hunt down drones, and large expensive laser cannons. At least once the cyber rifle becomes obsolete, DARPA’s will have only flushed a few hundred dollars down the drain.