For years, the Defense Advanced Research Project Agency, aka DARPA, has sought to develop a vertical takeoff vehicle that combines... 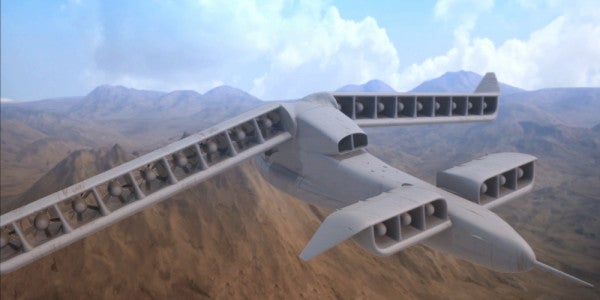 For years, the Defense Advanced Research Project Agency, aka DARPA, has sought to develop a vertical takeoff vehicle that combines the mobility and versatility of the standard helicopter with the range and top speed of a fixed-wing aircraft. Three years after selecting Aurora Flight Sciences to develop the first functional prototype in the VTOL Experimental Plane (VTOL X-Plane) program, DARPA may have found the aircraft of its dreams in the XV-24A:

The requirements for the VTOL program were relatively simple: Build a craft that can achieve a top flight speed of between 300 and 400 knots and have enough capacity to carry a “useful load” of 40% of the craft’s project weight (which DARPA put at between five and six tons). In 2016, Aurora delivered an innovative design for an hybrid electric unmanned craft with 24 ducted wind turbines fixed to two large rear wings and two smaller canard winglets mounted near the aircraft’s nose.

The Pentagon has put a high priority on VTOL aircraft that can take off and land on any terrain without a pre-existing runway, ensuring the speedy delivery of troops and supplies in hard-to-reach landing zones. As CNN reported in 2016, the Aurora design represents a faster, more fuel-efficient replacement to the existing V-22 and MV-22 Ospreys and a long-range alternative to traditional helicopters.

DARPA officials initially had their doubts about how the vehicle would fare during tests. “This is an extremely novel approach,” DARPA program manager Ashish Bagai said of Aurora’s design at the time. “It will be very challenging to demonstrate, but it has the potential to move the technology needle the farthest and provide some of the greatest spinoff opportunities for other vertical flight and aviation products.”

A year later, Aurora delivered. After initiating subscale testing in March 2016 (the subscale model used in demonstrations was a mere 332 pounds to the final XV-24A’s planned six-ton weight), DARPA on Tuesday released a video capturing the hybrid craft in action. According to Bagai, the prop plane “exhibited exceptional flight characteristics, with no loss in altitude even as it transitioned from vertical to horizontal flight.”

While Aurora’s demonstrator aircraft will be preserved for future tests, DARPA’s now focusing on developing a full-scale version of the craft under the official XV-24A designation. Here’s what it will look like upon completion, according to a DARPA concept video released in 2016: