This Desert Eagle Is The Nintendo Zapper You’ve Always Wanted

Remember the days of playing “Duck Hunt” on Nintendo? Often bittersweet, what with the actual playing time interrupted regularly when... 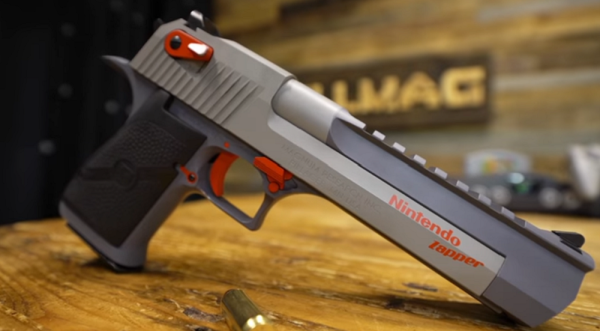 Remember the days of playing “Duck Hunt” on Nintendo? Often bittersweet, what with the actual playing time interrupted regularly when you had to take out the cartridge, blow into it, and then slam it back into place. Or the occasional rage fit because the damn Nintendo Zapper gun would miss even when the barrel was pressed right up against the television screen.

Well, there’s one Zapper that hits exactly where you’re aiming, and it doesn’t shoot an invisible laser beam.

A recent video by FullMag Studios shows host Richard Ryan taking his old Nintendo 64 to the farm, and putting it down with the Zapper, built by Freedom Munitions.

Though it may not be any good for actual duck hunting, if you point this beast at those pixelated bastards on your screen, you’re sure not to miss. But you will probably get a visit from the cops wondering why the hell you’re destroying your living room with a hand cannon.