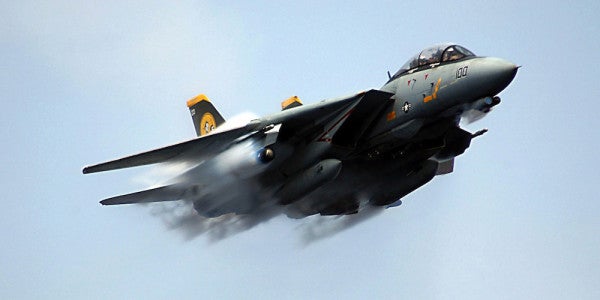 Between 1979 and 1985, a very special Navy F-14 Tomcat was one of NASA’s favorite guinea pigs. Designated NASA 991, the Northrop Grumman fighter jet conducted 221 flights out of the space agency’s Dryden Flight Research Center at Edwards Air Force Base, California, in the service of flight research — and to study the fighter’s alarming penchant for falling into a deadly spin, a tragedy immortalized by the death of Nick “Goose” Bradshaw in Top Gun.

To do this, NASA and the Navy sent its twin-engine test subject up to tumble uncontrollably through the skies above California, on purpose. And this 1980 archival footage, posted to the NASA Armstrong Flight Research Center’s YouTube page on July 25 (and surfaced by Popular Mechanics’ Kyle Mizokami on Aug. 15), captures the whole experiment in action:

At 41 seconds, the clip is a gut-wrenching look at the F-14’s spin problem: With its variable-sweep “swing wings” deployed in a takeoff/landing configuration, the aircraft suddenly starts to rotate along its vertical axis, tumbling into an aggressive roll. We can only pray for the poor test aviators getting bounced around in the Tomcat’s narrow cockpit.

These flights weren’t just to torture the poor pilots who strapped themselves into NASA 991. Using footage like this, NASA and the Navy eventually diagnosed and corrected the problem. The actual technical paper, also flagged by Popular Mechanics, is fascinating if you’re into that sort of thing, but Mizokami does a fine job putting it in into layman’s terms for those without advanced engineering knowledge:

NASA traced the problem back to the aileron rudder interconnect and laminar air flow. Air was not flowing smoothly over the F-14's wings while it was configured for landing, creating an opportunity for the plane to suddenly yaw left or right. Using feedback from more than 200 test flights, engineers made improvements to the plane's high angle of attack flying qualities, improving the plane's ability to resist sudden spin, and reducing “wing rock,” the tilting of the aircraft from one side to the other. A fix for the yaw problem was devised that involved cleaning up the surfaces of the Tomcat's wing, making air flow more smoothly over them at subsonic speeds.

So who’d win in an aerobatic showdown: NASA 991 or the Sukhoi Su-35 Flanker-E multi-role fighter that scared the pants off bystanders at the Moscow Air Show in July? Our money’s on the former, if only out of our loyalty to poor Goose.