U.S. Air Force officials canceled F-35 flights on Friday at Luke Air Force Base after over a month of pilots... 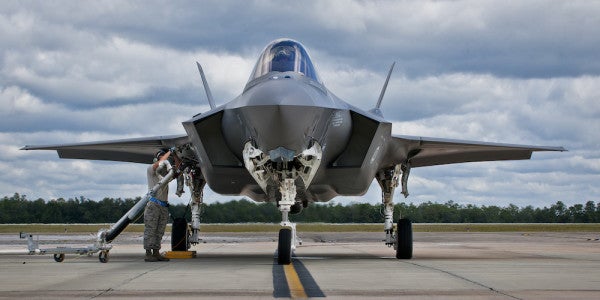 U.S. Air Force officials canceled F-35 flights on Friday at Luke Air Force Base after over a month of pilots reporting that the plane caused them to suffer from hypoxia-like symptoms from a lack of oxygen.

Pilots flying the world's most expensive weapons system apparently found themselves running short of air, though the Air Force said in all cases, the plane's backup system engaged and no lives or planes were lost.”In order to synchronize operations and maintenance efforts toward safe flying operations we have

“In order to synchronize operations and maintenance efforts toward safe flying operations we have canceled local F-35A flying. The Air Force takes these physiological incidents seriously, and our focus is on the safety and well-being of our pilots,” said Brig. Gen. Brook Leonard, 56th Fighter Wing commander in the statement to Business Insider. “We are taking the necessary steps to find the root cause of these incidents.”

This isn't the first time the F-35 has caused health risks to pilots.

Pilots of the Navy's F-35C reported that when taking off from aircraft carriers, the plane sometimes bucked them hard enough to hit their head on the canopy. In some cases, severe, persistent pain resulted.

Additionally, the F-35 has posed a risk to smaller pilots due to its ejection seat. In October 2015, Defense News reported that pilots under 136 pounds could have their neck snapped if they ejected from the F-35.

Lockheed Martin officials have told Business Insider that both the carrier takeoff and ejection seat problems are under review, and they hope to remedy them soon.

F-35 pilots contacted by Business Insider have said that the plane represents a revolutionary leap in innovation and capability and that ultimately, setbacks like these should be expected.