We spend a lot of time talking about the hugely expensive, pilot-smothering F-35 Lightning II joint strike fighter, but we’ve... 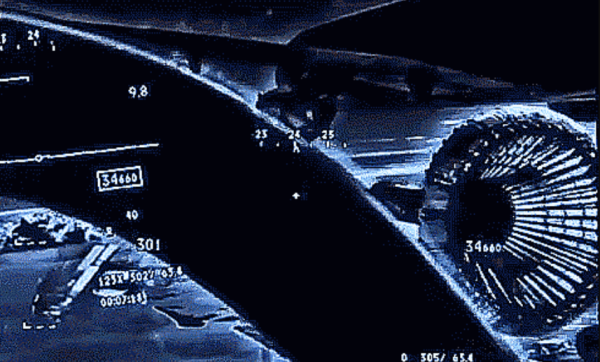 We spend a lot of time talking about the hugely expensive, pilot-smothering F-35 Lightning II joint strike fighter, but we’ve never actually seen what it’s like to handle the next-generation aircraft from a throttle jockey's point of view.

Luckily, that’s where Lockheed Martin’s unique Helmet Mounted Display System comes in. Rather than feed footage from a pilot’s point of view like the mega-popular GoPro, the HMDS grabs real-time imagery from six infrared cameras mounted around the body of the aircraft — allowing pilots to “look through” the airframe, in Lockheed’s words, with the equivalent of a heads-up display on steroids.

And the results are amazing:

This footage comes courtesy of a presentation by F-35 Government Flight Test Director Lt. Col. D. Tom Fields at a Flight Test Safety Committee Conference last May, helpfully surfaced by our friends at The War Zone via FlightGlobal. The HMDS footage itself comes from the second part of the presentation, a night system evaluation conducted aboard the USS America in November 2016.

The snapshots from the F-35B’s nighttime test aren’t just fascinating for their intricate, ghostly view into the cockpit, but because of what goes wrong. Fields’ candid commentary on a potentially disastrous display malfunction that nearly derailed the fighter’s landing on USS America “is downright refreshing considering the usual one-sided spin we get from the F-35 Program Office and its corporate partners,” as The War Zone puts it. “Fields makes it clear: ‘We got real lucky that night.’”

You can watch the whole 40-minute presentation below. The good stuff starts around 26:13.