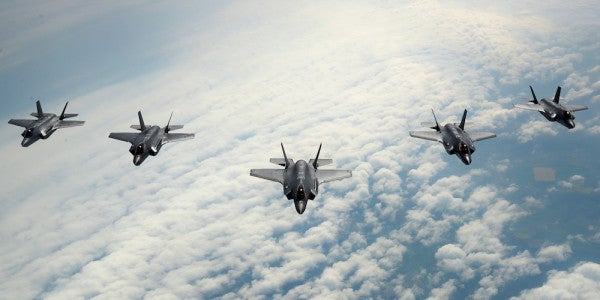 Ever since the U.S. used F-117s in 1991 to rock Baghdad, at the time one of the world's most defended cities, Soviets and other potential US adversaries have been studying up on how to counter stealth jets.

Later, over Serbia, an F-117 was shot down, forever souring the image of so-called invisible aircraft that have for decades been on top of the U.S. Air Force's agenda.

Today, Russia and China have built impressive arrays of very high frequency, or VHF, and other integrated radars that can spot even the U.S.'s most advanced and stealthy jets like the F-22 and the F-35 under the right circumstances.

While many have rushed to declare stealth a fruitless and expensive path for the U.S. Air Force to walk, retired Marine Maj. Dan Flatley told Business Insider why pilots of America's most expensive weapons system weren't afraid of Russian or Chinese counterstealth.

“Adversaries have to build a kill chain,” said Flatley, a former F-35 pilot. Just because a radar can find an object — and Russian VHF radars can spot F-35s — doesn't mean it can fix, track, target, and consummate that kill chain with a missile hit, he said.

“We're not trying to prevent every aspect of that chain, just snap one of those links,” Flatley said.

An F-117 Nighthawk flies over the Nevada desert. The unique design of the single-seat F-117 provides exceptional combat capabilities. The fighter can employ a variety of weapons and is equipped with sophisticated navigation and attack systems integrated into a digital avionics suite that increases mission effectiveness and reduces pilot workload. (U.S. Air Force photo/Staff Sgt. Aaron D. Allmon II)

So while an infrared search and tracking system could spot an F-35 and give enemy pilots an idea of where it is, it couldn't track it or target it with a missile. This means that the systems Russia and China have spent millions developing provide only a tiny glimpse of the F-35 — systems that may be sunk costs in the grand scheme of things.

“I don't need to stop everything all the time,” Flatley said of the kill chain. “I just need to make you unable to finish what you've already invested tons of time and money and effort in trying to shoot me down.”

“That's the thing people don't understand,” Flatley said. “They think we're saying we're invisible to everyone all the time, at all bandwidths and energy levels … That's not what we're saying.”

Flatley says F-35 pilots joke that only Wonder Woman has an invisible jet. The reality is that the F-35 is a huge piece of flying metal and alloy — a radar pointed at the right place at the right time will definitely spot it, but good luck shooting it down.

Meanwhile, as the enemy systems scour the skies for any trace of the F-35, the F-35 sees all of those radar emissions and can pinpoint the air defenses and enemy planes.

Where legacy planes had to choose between lethality and survivability on a mission, the F-35 can do four, 16, or even 32 things at a time, meaning that while air and ground threats look for the stealth jet, the F-35 can drop bombs to smash them, according to Flatley.

“We're extraordinarily confident in what we believe the performance of this jet is, and we have a lot of data and material to back that stuff up,” Flatley said.

Seven F-35Bs are on board the USS America beginning Oct. 28 until mid-November. Two of the jets are scheduled to begin the third shipboard phase of developmental test (DT-III) and five are scheduled to conduct operational testing.

So while the Russians' propaganda may boast that they can see F-35s, it may be a response to a platform that has rendered parts of their battle plan irrelevant.

The F-35 was built to penetrate the most guarded airspaces in the world and get the job done. While the enemy hasn't been standing still, making great progress toward countering the F-35, Flatley says he's sure the U.S. can carry out its mission on its terms.

“The expectation is that the F-35 will operate in a scenario against air and surface defense systems — and that's an expectation that the American taxpayer and public should have,” Flatley said. He also acknowledged the effort the U.S. has put behind the F-35 as a stealth penetrator and was resolute in that “we're not going to waste it.”