Fabrique Nationale d'Herstal was established with one purpose: to manufacture military rifles for Belgium. Over its 120-year history, the company has... 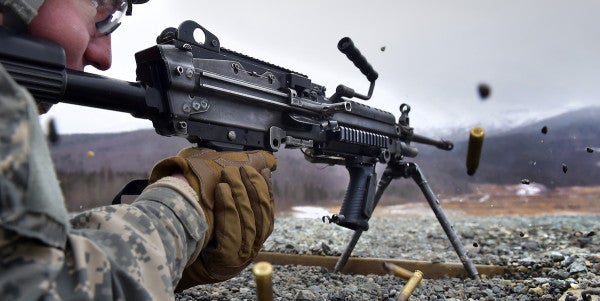 Fabrique Nationale d'Herstal was established with one purpose: to manufacture military rifles for Belgium. Over its 120-year history, the company has become one of the world's leading firearms manufacturers, with a range of products including pistols, submachine guns, rifles, and machine guns for militaries and gun enthusiasts. And with its “Military Collector” series, the company offers private collectors the chance to own “civilian-ready” versions of four FN rifles; most recently announced: the M249S PARA.

Last year, FNH USA launched the series, which features commercial versions of its most popular military firearms in recent history. Hailed as the closest you'll get to owning some of the U.S. military's firearms, the collection debuted with FN's version of two weapons currently in service — the M4 and the M16 — and recently added the M249 Squad Automatic Weapon, a light machine gun that fires a 5.56 mm round. FN’s version is a semi-automatic replica with a 200-round capacity.

Manufactured at FNH USA's factory in Columbia, South Carolina, the Military Collector series takes advantage of pre-existing tooling used to manufacture and test contract guns that meet military specifications. “Mil spec” firearms and parts are often coveted by the black rifle community. FN's collector series offerings are far from the only guns made to mil spec standards (the engineering standards required for most military hardware), but they do have the benefit of being made by the military's current contractor.

FNH USA is a military contractor that has produced a number of firearms for the military; in 2015, it won a shared $212 million contract with Colt Defense, to supply the Department of Defense with M4 and M4A1 carbines.

The highpoint of the Military Collector series at present is the belt-fed FN M249S. The 5.56x45mm SAW has been in service since 1984 and has seen action everywhere from Panama to Mogadishu to Afghanistan. At the beginning of the year, FN announced the addition of the Paratrooper version of the SAW with a telescoping stock and 16.1-inch barrel. The M249S has been reengineered to fire from a closed rather than open bolt, like the original. These changes help improve semi-automatic accuracy and should prevent the gun from being illegally converted to full auto.

In a statement announcing the M249S Paratrooper model, John Keppeler, the senior vice president of sales and marketing, boasted that “you'll notice only two major differences between the semi- and full-auto versions — the barrel length and reconfigured internal components to change the rifle's operation from open-bolt to closed-bolt. Authenticity was critical in this series and we changed as little as possible.”

Some may ask why would you want a squad automatic weapon that isn't “automatic.” Breaking out a belt-fed gun at the range is always a conversation starter and the chance to own a legal version of a weapon many collectors thought they'd never get the chance to even shoot is hard to pass up. Guns used by the military will always have an added credibility and allure for civilian buyers. And while the AR-15 market makes it relatively easy to buy or build an M4 or M16 clone, the M249S offers the only opportunity to own a SAW replica.

The Military Collector line, however, isn't cheap. The M4 and M16 replicas carry a manufacturer's suggested retail price of $1,749, placing them in the higher end of the AR-15 market spectrum. They ship with Knights Armament M4RAS Adapter rails, with rail adapter covers, as well as a vertical forward grip. The semi-automatic M249S comes in at an eye-watering $8,499. At that price, customers could buy an actual registered, entry-level machine gun such as a MAC-10. The newly introduced M249S PARA costs even more at $8,799. Though some might say that is a lot of money for a semi-automatic rifle that weighs 16 pounds, the M249S is undoubtedly the most collector-centric of the Military Collector series.

The series now includes almost every current FN model used by the military, but not all. Perhaps the next weapon to join the series will be the M240 general purpose machine gun, chambered in 7.62x51mm. The M240 is the U.S. version of the FN MAG, which is used by dozens of militaries around the world.