Forget The Swiss Army Knife. This Belt Will Save Your Life

If there’s one thing Boy Scouts are known for, it’s being prepared. But what about when they grow into men?... 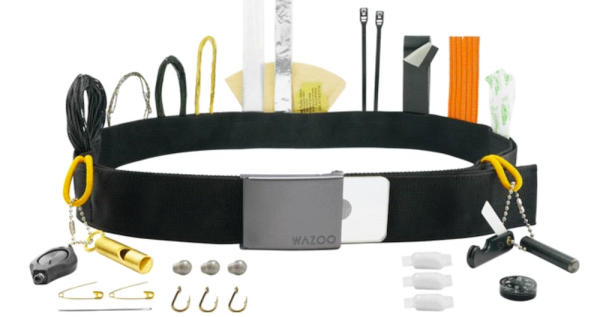 If there’s one thing Boy Scouts are known for, it’s being prepared. But what about when they grow into men? Though the Swiss Army Knife remains the classic pocket-sized survival tool for hiking and camping, if you were trying to survive say, a zombie apocalypse, you’d want something that can do more than cut string and open beer bottles (unless your plan for armageddon is to get wasted, which is totally understandable).

But if you’re looking for a more practical piece of survival gear, consider the Wazoo Cache utility belt. It has space for two dozen survival tools with room for more, and it still performs the basic function of holding up your pants.

Funded through Kickstarter, the relatively-cheap Minimalist model features a fold-over 28-inch pocket with hook-and-loop enclosure, bottle opener, bead chain, and gear loops. Being the base model, it also leaves plenty of room for other gadgets, first aid or otherwise.

The Essentials model, priced at $75, comes with the additions of fishing gear, water purification tabs, and fire starter kit, while the Adventure model ups the ante even more with a compass, ceramic knife, signal mirror, wire, and rope for $115. Fully loaded, you’ll look like Batman decided to take a vacation into the wilderness. And because the pocket is folded neatly inside the belt, no one has to know that you’re essentially wearing a stylish bug out bag around your waist every day.