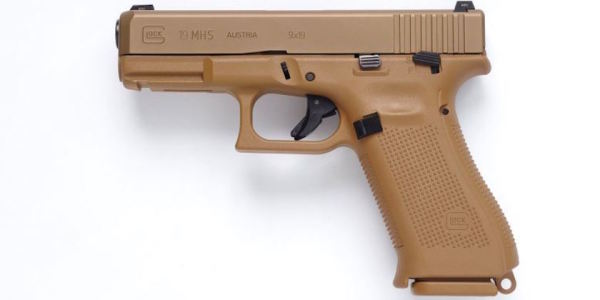 Glock Inc. has decided to release photos of the pistols it entered in the U.S. Army’s Modular Handgun System competition.

The Smyrna, Georgia-based company submitted versions of its 9mm Glock 19 and .40 caliber Glock 23 pistols in the Army’s effort to replace its M9 9mm pistol. The release of the photos comes three weeks after the Government Accountability Office denied Glock’s protest against the U.S. Army’s decision to select Sig Sauer, Inc., to make the service’s new Modular Handgun System.

“GLOCK, Inc. met or exceeded all of the mandated threshold requirements set forth in the RFP by the Army,” Josh Dorsey, vice president of Glock said in a statement.

Military.com has requested an interview with Glock to give the company the opportunity to explain why it protested the Army’s decision.

Glock’s MHS pistols feature a frame-mounted thumb safety and a lanyard ring next to the magazine well.

Glock filed the protest with the GAO on Feb. 24, challenging the Army’s interpretation of the solicitation regarding the minimum number of contract awards required by the Request for Proposal, according to a statement by Ralph O. White, managing associate general counsel for Procurement Law at GAO. Glock also alleged that the Army improperly evaluated its proposal.