The Government Accountability Office announced today that it has denied a protest from Glock to reconsider its decision to award... 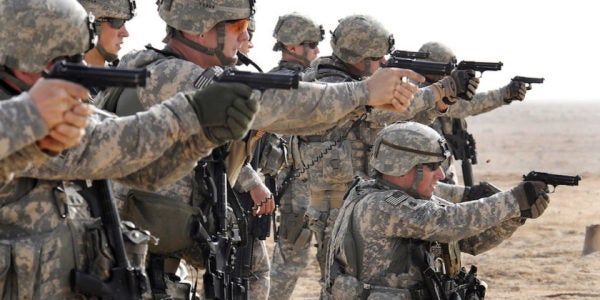 The Government Accountability Office announced today that it has denied a protest from Glock to reconsider its decision to award Sig Sauer the 10-year, $580 million contract for the Army’s new service pistol.

In February, Glock officially protested the Army’s adoption of the Sig P320 as the M17; however, the complaint did not stop Sig Sauer from moving forward with the project, in part because Glock failed to file the protest within the timeline, Task & Purpose reported earlier this year.

The reason for Glock’s appeal was not made transparent until today when GAO announced it denied the protest. The firearms manufacturer protested the Army’s “interpretation of the solicitation regarding the minimum number of contract awards required by the” request for proposal, managing associate general counsel for procurement law Ralph White told Army Times in an emailed statement.

GAO denied the challenge, finding that the RFP allowed the Army to make only one award, although three were permitted under the proposal’s terms, he said.

Glock also alleged in its protest that the Army improperly evaluated its proposal. The GAO also denied that challenge, finding that “any errors did not prejudice Glock in the competition,” according to White's statement.

The P320 hit the civilian market in January 2014, and the handgun is an ambidextrous “striker-fired, polymer-framed, 9x19mm pistol with a steel slide and a short recoil-operated action,” Task & Purpose reported earlier this year.

As it stands now, soldiers with the 101st Airborne Division at Fort Campbell are slated to be among the first to receive the new handgun sometime later this year.