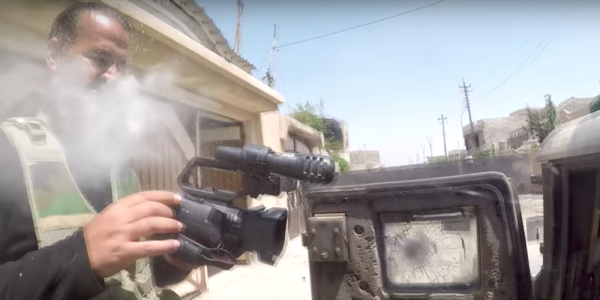 When Iraqi journalist Ammar Alwaely decided to cover the U.S.-led coalition’s bloody siege of ISIS-occupied Mosul, he surely knew the risks. But Alwaely probably didn’t know how close he’d come to death — or that his camera would save his life.

On May 13, Alwaely was filming on the streets of Mosul when an ISIS sniper reportedly took a shot at him. Instead of killing him, the round deflected off of the compact GoPro camera affixed to his flak jacket, according to The Sun.

The whole incident was captured on video by Owen Holdaway, a journalist for The Sun:

“At first I did not know what happened. I fell to the floor and could not turn around to see if Ammar was OK,” Holdaway said of the incident. “The explosion had smashed the camera, spraying plastic into his face and cutting his lip.”

In the dramatic video, the GoPro disappeared in a cloud of plastic and metal fragments as Holdaway and his fellow journalists dove for cover. In the background, a man’s voice can be heard saying “Ammar, that was fucking close, man.”

Alwaely seems totally unfazed in the footage. “This is my blood on your face,” he chuckles to Holdaway, who kept filming the entire time. Alwaely received basic medical treatment for minor cuts from the GoPro fragments shortly thereafter, according to The Sun.

“I knew immediately, if it had not hit the camera, or been a few inches to the right, it would have hit his heart, and fatal,’ said Holdaway.

Alwaely isn’t the first journalist targeted by ISIS, obviously: Of the 74 journalists killed in 2016, 26 died in Iraq and Syria covering the multinational military campaign against ISIS, according to Reporters Without Borders. But with the jihadi militants on the retreat in the strategically important city of Mosul, he may be one of the last.

GoPro did not immediately respond to request for comment.