The wonderful world of firearms accessories never ceases to amaze with its deadly ingenuity, and the Gripknife is no exception. … Continued 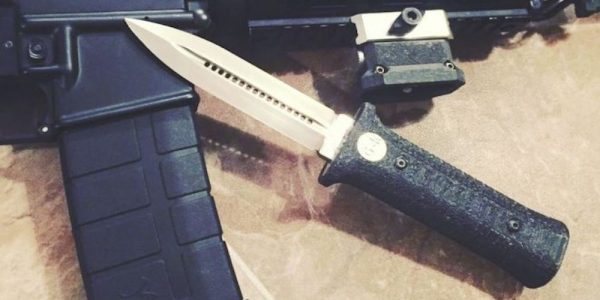 The wonderful world of firearms accessories never ceases to amaze with its deadly ingenuity, and the Gripknife is no exception. While bayonets have been around since the 16th century, the unusual new blade from Ohio-based Switch Grip LLC, is perhaps the latest way to stick a knife to your gun — and all you need is a picatinny rail system

A combination of spring-loaded knife and vertical grip, the Gripknife is touted as a handy, efficient last line of defense for those who find themselves out of ammo in a close quarters situation.

“Bayonets have not been adapted for the small rooms and tight spaces of modern warfare or home defense,” the company says. “Gripknife is the Modern Day Bayonet.”

Attached to the base of the rifle, the GripKnife is designed with a release button to easily launch the spring-loaded blade from a rubber grip just like a normal automatic knife. The blade locks in place ready for use; to retract the blade, the user simply depresses a blade locking button and pushes the knife back into the base.

“When clearing a room in XCQB, no knife can be deployed and used faster than Gripknife,” the company claims on its website, boasting a draw time of “a fraction of a second.”

The design is protected by a series of patents granted between 2013 and 2015, but it seems the company is finally ready to bring their blade to market. Gripknife’s website inviting prospective customers to sign up for a pre-order mailing list.

The Gripknife will initially come in two different lengths: The three-inch Defender for those who prefer shorter vertical front grips and the four-inch Patriot for those looking for a longer blade (It’s also worth remembering that state laws regarding knife length and deployment method vary, so a four-inch blade might be legal in one state while automatically deployed knives are illegal in another).

Gripknife may be working on manual versions of their knives as covered by one of their patents, but there is no word yet if new versions will be available for those running M-Lok or KeyMod systems on their rifles.

While a price hasn’t been officially announced yet, Gripknife has floated a price range of $300-$400 on its Facebook page, arguing that “high-quality materials, processes, coatings, precision machining” justify the high price — as does the blade’s production right here in the United States. And while that may seem steep at first glance, it’s roughly equivalent to a precision made knife made by companies like Benchmade or Guardian Tactical.

With this recommended retail price, it seems unlikely the Gripknife will catch on with the majority of gun owner, but if you're a knife guy and you like running a vertical grip on your rifle, then the upcoming line of Gripknife products might be for you.

Check out the most recent Gripknife patent below: