These Heaven-Sent Hand Cannons Cost $4.5 Million And Are Made Of Meteorite

Long ago, a large meteorite called the Gibeon burst in the Earth’s atmosphere, showering present day Namibia in Africa with … Continued 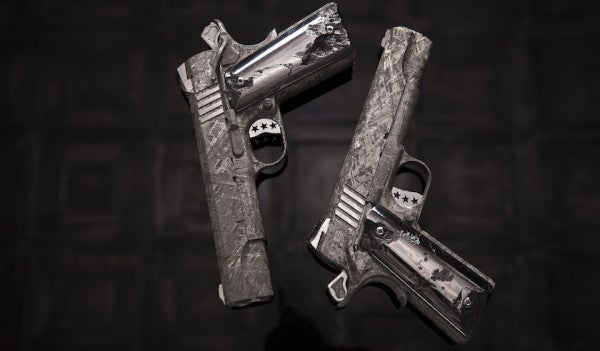 Long ago, a large meteorite called the Gibeon burst in the Earth’s atmosphere, showering present day Namibia in Africa with tons of interstellar material. For decades, scientists have used the fragment to study the origins of the universe, but when a 77-pound chunk made its way into the hands of Pennsylvania’s Cabot Guns, the firearms company had something more practical in mind: turn it into a set of fully-functional twin pistols.

Cabot, which specializes in limited versions of the iconic Colt 1911, once the standard-issued sidearm for the U.S. Army, decided to call the .45 caliber pistols the Big Bang Pistol Set — an appropriate name considering the Gibeon is estimated to be around 4.5 billion years old. The astronomical price tag seemed like a no-brainer, too — $4.5 million, which makes these heaven-sent hand cannons the most expensive firearms in history.

Cabot refers to their creation as “an ultimate achievement of American, design, willpower, and can-do spirit,” and it’s hard to argue with that flattering self-assessment. The company managed to take a shapeless piece of space rock once used by African tribespeople to craft primitive daggers and blades, and use X-rays, 3-D modeling, and electron-beam welding to transform it into a pair of beautiful, modern-day precision weapons that, aside from a few small components, are 100% meteorite. Even the trigger was forged in space.

If you don’t have $4.5 million to spare, well, these pistols aren’t for you. They’re the only ones that exist on Earth (or anywhere else), and there’s a good chance they’ll be the only ones to exist forever and always. But there’s hope, young Jedi: Cabot also used pieces of the Gibeon to make a just-as-impressive tungsten carbide blade, called the Big Bang Knife, which is adorned with a meteorite handle and boasts a (relatively) modest price tag of $10,000.

“Experts in the field have previously told me it was not possible to make a knife from tungsten carbide,” Cabot Guns president Rob Bianchin told Task & Purpose. “The most mythical steel knives have a Rockwell hardness of 62 to 64. One Japanese specialist made some at 67. This one is at a HRC of 71. It's the knife of the future, adorned with the oldest possible grips.”

The Big Bang Pistol Set is up for grabs now (so what are you waiting for?), and the Big Bang Knife will be available for purchase later this month. Only five will be sold.