The Pentagon’s Most Expensive Aircraft Just Got Even More Expensive

When the Department of Defense approved Lockheed Martin’s CH-53K King Stallion for Marine Corps use, a leaked decision memo revealed... 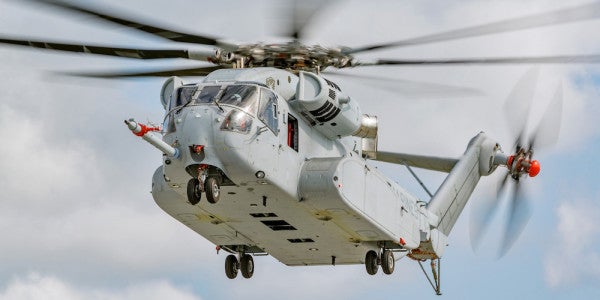 When the Department of Defense approved Lockheed Martin’s CH-53K King Stallion for Marine Corps use, a leaked decision memo revealed the brand-new heavy-lift helicopters would cost $138.5 million apiece — which, at millions more than the infamously pricey F-35A Lighting II joint strike fighter, makes the King Stallion the most expensive aircraft in the Pentagon’s arsenal.

Now, the helicopter is looking even more costly. On May 9, Bloomberg reported that new King Stallion will cost closer to $144 million apiece, 4% more than the “program acquisition unit cost” projected by the DoD last month, according to Pentagon’s Cost Assessment and Program Evaluation.

To further complicate matters, the aircraft won’t achieve initial combat capacity until the end of 2020, a year later than initially expected.

To be fair to the Pentagon, the King Stallion may be worth a lot of baksheesh. Engineers at Lockheed designed the copter to haul up to 27,000 pounds — triple the cargo of the CH-53E Super Stallion, the Pentagon’s current heavy-lift copter of choice — without any major changes in the aircraft’s dimensions. Here’s what Task & Purpose’s Brian Jones wrote of the King Stallion in March:

As Bloomberg notes, it’s likely the King Stallion program will end up costing far less than the initial projections suggest, but the optics of a heavy-lift copter that’s significantly more expensive than the much-maligned F-35 program will prove burdensome for the Pentagon in coming weeks. House Armed Services Committee member Rep. Niki Tsongas, a Massachusetts Democrat, questioned the King Stallion program for costing “a heck of a lot of money.” And that was before the news of this most recent cost hike.

When reached for comment by Bloomberg, a Navy spokeswoman emphasized that the Pentagon and Lockheed remain “committed to reducing program costs over the life of the program.” But if this helo is going to cost more than an advanced fighter jet, it should at least transform into a giant murderbot — or come with decent cupholders.