Helmet That Saved An Orlando Cop Is American Made, Combat Tested

Almost immediately after the mass shooting in a gay nightclub in Orlando on June 12 that left 49 people dead,... 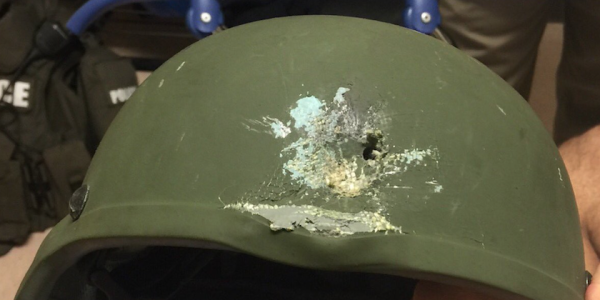 Almost immediately after the mass shooting in a gay nightclub in Orlando on June 12 that left 49 people dead, reports emerged that Michael Napolitano, one of the SWAT officers involved in the raid that killed shooter Omar Mateen, had survived being shot in the head.

Photos of the Kevlar helmet that stopped the round from killing Napolitano soon emerged on the internet, showing a small crater in the armor exactly where the mount for night vision optics would have been. Another photo showed a smiling Napolitano with bruising and lacerations on his forehead.

Related: Why the soldier killed in Orlando could receive a purple heart >>

It’s now been confirmed that the helmet was a Batlskin Viper A3 manufactured by Vermont-based company Revision, which manufactures eye and head protection systems for law enforcement and military personnel.

According to the Revision website, the A3 is a customizable aramid helmet that meets the U.S. Army standard for impact protection and sports a geometry similar to the ACH. It is available in three different cuts — full, mid, and high-cut — (Napolitano was wearing the mid) and stops NIJ IIIA level threats.

To meet the National Institute of Justice (NIJ) IIIA level standard, body armor must be able to protect from .44 Magnum, 9mm NATO, and .0357 SIG rounds.

During the Orlando shooting, Pateen was armed with a Sig Sauer MCX and a Glock 17. While the Glock fires a 9mm round, the MCX typically fires .223 Remington ammunition, which the A3 isn’t technically designed to handle. In this case, it held up.