Since 1942, the U.S. military has used thousands of helicopters for reconnaissance, transport, and combat support. Developed in the 1930s... 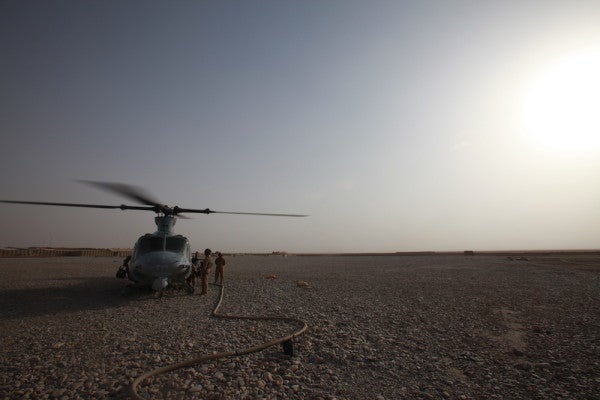 Since 1942, the U.S. military has used thousands of helicopters for reconnaissance, transport, and combat support. Developed in the 1930s and used in warfare a decade later, the helicopter differentiates itself from the airplane by using rotors to take off and land vertically, hover, fly forward, backward, and side-to-side — providing the military with an unparalleled amount of in-flight flexibility.

Between the very first Sikorsky R-4 used during World War II and the Army’s futuristic S-97 Raider, here are badass U.S. military helicopters that support troops from the skies.

A flight medic with Charlie Company, 3rd Battalion, 126th Aviation Regiment (Air Ambulance, lowers from a Black Hawk helicopter on a jungle penetrator during MEDEVAC training at Camp Ethan Allen Training Site, Aug. 1, 2015, Jericho, Vt.The Army first began fielding Sikorsky’s UH-60 in 1978. The function of the Black Hawk is to transport troops and provide logistical support. However, it has also performed missions involving medical evacuations, search-and-rescue, and armed escort. More than 2,000 UH-60 Black Hawk helicopter variants are in service with the U.S. military. It is also a subject of the 2001 modern war classic “Black Hawk Down.”

U.S. Army AH-64 Apache Longbows pilots from the 1-135th Attack Reconnaissance Battalion at Whiteman Air Force Base, Mo., prepare March 27, 2013, for their deployment to Afghanistan.The Apache is a twin-engine, four bladed, multi-mission attack helicopter. As of January 2015, the Army’s Apache fleet has accumulated more than 3.9 million flight hours since its initial delivery in 1984, according its manufacturer, Boeing. The Apache has a four-blade main rotor and a four-blade tail rotor. The Apaches has also made its mark in popular culture, featured as the image in the meme called “I Sexually Identify As An Attack Helicopter.”

Aviation Boatswain's Mate 3rd Class Michael Allen, a landing signal enlisted, launches an Army CH-47 Chinook helicopter assigned to Alpha Company Four, 160th Special Operations Aviation Regiment (SOAR) during deck landing qualifications aboard the amphibious assault ship USS Peleliu (LHA 5).Development of the Boeing Chinook began in 1956. The tandem-rotor medium transport helicopter was delivered for first use in Vietnam in 1962, and though it has seen various upgraded iterations, it is still in use by the Army, and is not expected to be retired until 2060 — which will make it the Army’s first “100 year aircraft,” according to FlightGlobal.

A sheet of ice covers a UH-34 Seahorse aboard Marine Corps Air Station New River, N.C., on Jan. 29, 2014.The Sikorsky SeaHorse flew its first flight in 1954, and was purchased by the Army and the Navy in 1955. According to the Pacific Aviation Museum, it is one of the most recognizable aircraft in military history. It boasted an unusual shape, with the engine sitting behind the cockpit. Also called the Choctaw, it is mostly known for its multi-role use in Vietnam. Unfortunately, its manufacturers decided that future military helicopters would need more space than the SeaHorse allowed.

The Unmanned Little Bird helicopter, a smaller variant of the larger, manned A/MH-6M can be controlled by a pilot or piloted remotely.Nicknamed “the killer egg,” the Little Bird’s primary mission is to deposit special operations forces onto rooftops or into narrow spaces. It was originally designed for reconnaissance, but has primarily been used by special operations forces, and has also proven effective in combat. Military.com reported that “the MH-6 Little Bird made its way into popular culture with the book and movie ‘Black Hawk Down,’ which portrayed MH-6 Little Birds carrying Delta Force Soldiers into the overrun city of Mogadishu.”

A UH-1N Huey gunship assigned to Marine Medium Tiltrotor Squadron (VMM) 266 (Reinforced), 26th Marine Expeditionary Unit (MEU) lands at a forward arming and refueling point during an exercise in the 5th Fleet area of responsibility, April 29, 2013.More fondly known as the “Huey,” this helicopter is a Bell aircraft with a single turboshaft engine and two-bladed main and tail rotors. It was first used in Vietnam to carry infantry into combat. The Drug Enforcement Administration still flies the Huey for counter-narcotics raids in Afghanistan. In addition, it spawned the design for AH-1 Cobra.

The H-3 Sea King helicopter community celebrated the 50th anniversary of the aircraft’s historic first flight March 11.The Sikorsky Sea King was the first amphibious helicopter employed by the military. It was used by the Navy to detect, classify, track, and destroy enemy submarines. It consists of a boat-like hull body and pontoons with floating bags, which give the Sea King the ability to land on water. Though it is no longer in production, it still serves as the aircraft used by Marine One to fly the President of the United States.

An MV-22 Osprey assigned to Operational Test Squadron 21 departs the flight deck of the amphibious assault ship USS Wasp during testing and evaluating of the Osprey for its upgraded flight control software and its ability to conduct short take-offs and roll-on landings.Bell-Boeing’s Osprey is a multi-role combat aircraft that uses tiltrotor technology to combine the best of airplanes and helicopters into a single aircraft. Through the the tiltrotor, the Osprey can take off and land like a helicopter, but convert to a turboprop airplane in-flight, according to HowStuffWorks. The MV-22 replaced the CH-46 Sea Knight for the Marine Corps. The Air Force uses the CV-22 iteration for special operations. Overall, the Osprey has been deployed in transportation and medevac operations across Iraq, Afghanistan, Libya and Kuwait.

The CH-53 Superstallion air lifts an armored vehicle during the Marine Air-Ground Task Force demonstration at the Marine Corps Community Services (MCCS) sponsored 2014 Air Show aboard Marine Corps Air Station (MCAS) Miramar, San Diego, Calif., Oct. 5, 2014.The Super Stallion, produced by Sikorsky, is both the largest and heaviest helicopter used by the military. It has been used nearly three decades, and boasts a seven-bladed main rotor. The Marine Corps has been using them since the 1980s for heavy lifting as they can carry 73,500 pounds of cargo. The Super Stallion is expected to be in-use until 2025.

A CH-46E from Marine Medium Helicopter Squadron (HMM) 264 takes off from the multi-purpose amphibious assault ship USS Iwo Jima (LHD 7).Boeing’s Vertol produced the the first Marine Corps Sea Knight and delivered it in 1964. The fleet began military service in Vietnam, where it carried troops and cargo to and from Navy ships in the China Sea. Nicknamed the “phrog,” it was a medium-lift tandem rotor cargo helicopter, used across Beirut, Desert Storm, Iraq, and Afghanistan for assault transport of combat troops, supplies, and equipment. It was retired in 2014 by the Navy and 2015 by the Marine Corps.

U.S. Army OH-58 Kiowa Warrior armed reconnaissance helicopters return to Pacific Missile Range Facility, Barking Sands after a live-fire exercise during Rim of the Pacific (RIMPAC) Exercise 2014.Produced by Bell, the Kiowa Warrior is an Army reconnaissance helicopter.The primary function of the Kiowa Warrior is scout attack. It can be upgraded to carry out transport and utility roles using equipment kits installed externally. The aircraft is a single engine, four-bladed helicopter with advanced visionics, navigation, communication, and weapons and cockpit integration systems. The Kiowa Warrior fleet has flown over 800,000 combat hours. It was meant to be replaced by the RAH-66 Comanche, which was scrapped in 2004. The helicopter is expected to be retired by the end of 2016.

Pilots return to Camp Bastion in their AH-1 Cobra Attack Helicopter following a routine mission in Helmand, Afghanistan Nov. 28.The Cobra is a two-blade, single engine attack aircraft manufactured by Bell. It got its original design — including the same engine, transmission, and rotor system — from the Huey. The military has used it since 1967, and it was deployed to Operation Iraqi Freedom in March 2003. The Super Cobra was the first attack helicopter to qualify for both the sidewinder air-to-air missile and the sidearm anti-radiation missile, and it can be equipped with hellfire missiles. According to the Marine Corps, “Whether it's providing cover for advancing ground forces or escorting assault support helicopters en route to a landing zone, the AH-1Z is called on when Marines need firepower from the air.”