Last night, two destroyers in the Mediterranean Sea fired 59 Tomahawks into Syria as a response to President Bashar Al-Assad’s... 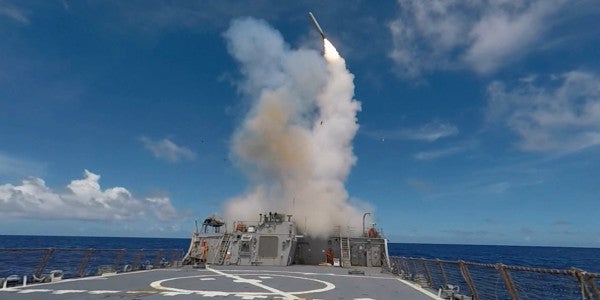 Last night, two destroyers in the Mediterranean Sea fired 59 Tomahawks into Syria as a response to President Bashar Al-Assad’s use of sarin gas munitions on innocent villagers in rebel-held territory on Tuesday. The warships, USS Ross and USS Porter, executed what appears to have been a by-the-numbers strike on al-Shayrat base in the Syrian city of Homs, where this week's chemical strikes are reported to have originated.

The Tomahawk Land Attack Missile is a long-range, all weather, subsonic cruise missile with a sometimes controversial history. Nothing says “regime change” like cruise missile attacks. But let’s not get wrapped up in that mess. The Tomahawk is one of, if not the most, versatile weapons platform the U.S. military brings to a fight. But what are these missiles really all about?

TLAMs — developed by General Dynamics in the 1970s, but now made by Raytheon — first deployed in 1983. They exploded onto the world stage in the first Gulf War and have been used in nearly every conflict since.

Originally designed to be a medium to long-range, low-altitude missile that could be launched from a surface platform (ship or land), the Tomahawk has been updated several times over the years. Some variants even include payloads that can allow multiple strikes over several targets (pretty cool, huh?).

The currently deployed variants — TLAM-C, TLAM-D, and TLAM-E — all have official ranges between 700 and 900 nautical miles. They are equipped with redundant guidance systems; some media coverage speculates a Tomahawk can be guided through a window hundreds of miles away, though analysts doubt it’s quite that accurate. Some of the retired versions were capable of carrying nuclear warheads, but those currently deployed are not. Tomahawks cost up to $1,500,000, depending on the variant, and they are launched from the Vertical Launch System aboard warships and out of torpedo tubes on submarines.

This is a missile that can look down at the ground it’s flying over and compare it to a contour map to ensure accuracy. I can barely use a map without my cellphone GPS.

But who decides who shoots a TLAM, where it goes, and which variant to use? The Tomahawk strike coordinator (TSC) at the fleet level is that person, usually a mid-level Navy officer. The TSC usually presents the flag officer in charge of the fleet with one or more options for the strike plan.

TSCs have a lot on their plates, and they must consider many variables. Distance, target composition, and more all play into the decisionmaking process. The Navy, contrary to popular belief, is all about efficiency and wouldn’t want to waste a more advanced, bells-and-whistles TLAM on something that a baseline variant could handle. Nor does the service generally use up all missiles on a vessel that just arrived in theater if there’s a soon-departing ship or sub full of TLAMs.

Aboard the individual ship or sub, fire controlmen are the folks who operate and maintain the Tomahawk missiles, including shooting them when asked. They use a few different control systems, but the most common is the Tactical Tomahawk Weapon Control System, or TTWCS. TTWCS receives mission packages that are developed off-ship, in part by the Tomahawk strike coordinator, sent via secure message to ships, and then uploaded into the missiles for mission execution. Tomahawks can be reprogrammed during flight if the mission requirements changed.

The sound of freedom is varied but always distinct. Sometimes it's the whoosh of a supersonic missile leaving a warship, and other times, it's the low rumble of a Tomahawk heading to spread democracy. Either way, it’s clear our military is well-equipped to protect and defend around globe.