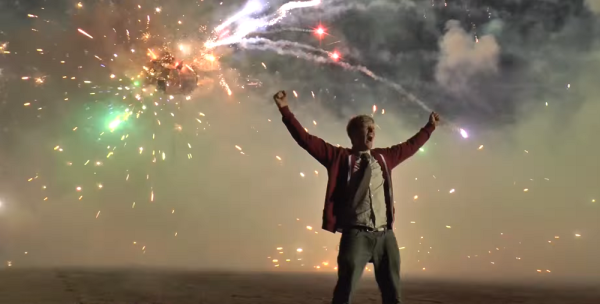 Sometimes one box of fireworks isn’t enough. That’s why Colin Furze, a YouTube celebrity and quirky inventor — err, mad scientist — decided to wire 58 boxes together into a giant firework Deathstar in his latest video.

Posted June 9, the YouTube video demonstrates Furze’s latest invention, named after the planet-destroying space station from Star Wars. The gigantic cluster of fireworks, 5,000 in total, is held aloft by a large crane, with the fuses all running back to a single switch, which Furze sets off with his characteristic cackle before running around as they explode overhead.

A former plumber, Furze now creates inventions to display on his YouTube channel. His creations range from an incredibly unsafe jet bike to a homemade thermite launcher.

Check out Furze’s most recent video below.