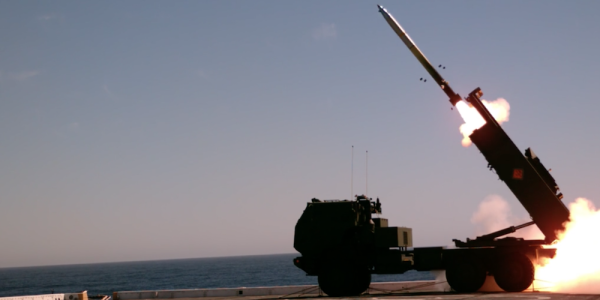 The M142 High Mobility Artillery Rocket System (HIMARS) is no longer reserved for bombarding the bejesus out of ISIS militants in Syria from the cover of the war-torn country’s rolling deserts: Marine Corps officials are experimenting with firing the guided artillery system from the deck of an amphibious ship in the middle of the ocean.

Operating aboard the USS Anchorage off the coast of southern California as part of Exercise Dawn Blitz on Oct. 22, a detachment of Marines with 5th Battalion, 11th Marine Regiment, 1st Marine Division out of Camp Pendleton set up a HIMARs system on the amphibious transport dock, chaining the vehicle-mounted system to the vessel’s flight deck before firing off a 227mm GPS-guided M31 Guided Multiple Launch Rocket System (GLMRS) rocket at a mock target floating in the waters near a Pacific island some 70 kilometers away.

The results were, well, explosive:

Sure, parking a rocket truck on the flight deck of a vessel on the open ocean seems simple enough, but Marine officials are overjoyed with the success of the Oct. 22 exercise. “The ability to project power from and at sea is critical,” 1st Marine Expeditionary Brigade ops officer Lt. Col. Tom Savage told the U.S. Naval Institute from aboard the Dawn Blitz flagship USS Essex. “It’s a significant capability.”

The test has been in the works since at least September, when Marine Commandant Gen. Neller dropped a public hint. “We know we can shoot HIMARS [High Mobility Artillery Rocket System] off the flight deck of a ship,” Neller said during remarks at the at the Marine Corps League’s annual Modern Day Marine expo in Quantico, Virginia, on Sept. 21, according to Defense News. “You’re going to see precision fire delivered off amphib ships, whether it comes out of tube guns or rockets or delivered from unmanned systems.”

Dawn Blitz offered the perfect opportunity to give Marines “a piece of the sea control mission,” as USNI News put it, and not just from the deck of transport docks like the USS Anchorage. During an Oct. 23, exercise, several MV-22 Osprey tilt-rotors and CH-53E Super Stallion helicopters transported a Marine raiding party to secure a strategically-important airstrip on a nearby island. As Rear Adm. Cathal O’Connor told USNI News, the idea is simple: “[S]end the HIMARS ashore and then it can start ranging targets at sea.”

“Suddenly, you have a mobile capability that was at sea and is now ashore, and now you’ve got an opportunity to maneuver the ships away with this providing overwatch,” O’Connor told USNI News. “It’s pretty amazing.”

If Neller’s September vision for HIMARs holds, and the Marine Corps starts adapting TTPs for launching naval gunfire on the fly — which the Anchorage test suggests it is — then Marines can expect to find themselves engaging targets while still rocking and bobbing at sea… long before they hit the beach or fast-rope into some poor schmuck’s compound.