The sleek aircraft, really more rocket than plane, dropped from the wing of a B-52 before shooting through the sky … Continued 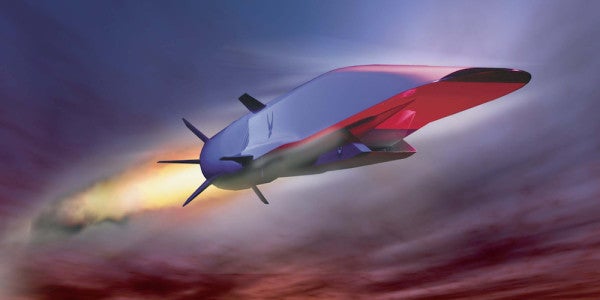 The sleek aircraft, really more rocket than plane, dropped from the wing of a B-52 before shooting through the sky above Point Mugu Sea Range off the California coast, leaving a long, white contrail in its wake.

The unmanned X-51A hit Mach 4.8, almost five times the speed of sound, with help from a solid rocket booster. Then the Boeing Co. aircraft jettisoned the booster and its experimental scramjet engine took over, sucking in highly-compressed air to propel the vehicle even faster — to a hypersonic speed of about 3,400 mph, or Mach 5.1.

The aircraft relied on that scramjet for only 3½ minutes during the 2013 test flight, but researchers say reliable technology that propels aircraft to hypersonic speeds of Mach 5 or higher could be functional within 10 years, initially for use in missiles.

The stakes are high.

The Pentagon sees hypersonic weaponry as a potential game changer that could give it — or an opponent — the kind of edge that stealth aircraft or smart bombs did in decades past. Hypersonic missiles would be extremely difficult to shoot down, arriving with little to no warning and maneuvering to avoid defenses.

Russia and China are also developing hypersonic missiles, and in November, there were reports China had started building the world’s fastest wind tunnel to test hypersonic aircraft and weapons.

“I am also deeply concerned about China’s heavy investments into the next wave of military technologies, including hypersonic missiles,” Adm. Harry Harris Jr., head of the Navy’s U.S. Pacific Command, said last week before a House Armed Services Committee. “If the U.S. does not keep pace, (U.S. Pacific Command) will struggle to compete with the People’s Liberation Army on future battlefields.”

As with past programs, including stealth technology and ballistic-missile research, Southern California could be poised to take a leading role in its development.

The Defense Advanced Research Projects Agency, or DARPA, the same agency that helped develop the Internet, and the Air Force are spearheading a program called the Hypersonic Air-breathing Weapon Concept. It has awarded defense firms, including Raytheon Co. and Lockheed Martin Corp., contracts to work on technologies that would enable an “effective and affordable” air-launched hypersonic cruise missile.

Aerospace firm Orbital ATK Inc. also was recently selected to take part in a hypersonic aircraft engine project with DARPA, while military aircraft manufacturers have discussed their own concepts for hypersonic planes.

Nearer term, the Defense Department is prepared to start testing a hypervelocity projectile for gun systems that could reach speeds close to Mach 6, according to reports. The projectile could have implications for future missile defense.

Reliable hypersonics not only could propel a missile to incredible speeds that make them harder to shoot down but also could allow for greater maneuverability at unusual altitudes — both nearer to the ground and far higher than the range of current missile defense systems, according to a Rand Corp. report released last year.

“There was this old saying that hypersonics was the future and always would be,” said Kevin Bowcutt, senior technical fellow and chief scientist for hypersonics at Boeing, who came up with the original concept design for the X-51A in 1995. “Now people believe it. It’s real.”

The U.S.’ current technological emphasis on hypersonics is multifold. Historically, the U.S. has been a leader in this field, and the technology is promising. But development is not being driven by a specific mission need, said James Acton, co-director of the Nuclear Policy Program at the Carnegie Endowment for International Peace think tank.

Other analysts have said the current push for hypersonics could be an attempt to discourage other countries from considering hypersonic missile attacks.

But to develop functional hypersonics technology, the U.S. will need to develop engine systems and materials that can operate at high speeds and temperatures for extended periods of time. That research and development cost alone would be significant, and wouldn’t even include the billions of dollars needed to develop operational vehicles, experts say.

Tens of billions of dollars could be spent on hypersonics contracts between 2020 and 2035 if the research “comes to fruition in real weapons programs,” said Loren Thompson, an aerospace analyst with the Lexington Institute think tank, which receives funding from Lockheed Martin and Boeing.

That could be a boon for Southern California.

Thompson said the region is home to key research centers for industry and the U.S. government — such as Lockheed Martin’s secretive Palmdale Skunk Works facility and Edwards Air Force Base — which could make it the center for hypersonics research. Boeing has said hypersonics work already is being done at its Huntington Beach facility, as well as in St. Louis and Seattle.

Major research and development programs of the past brought thousands of jobs to the region. When the B-2 stealth bomber neared its production peak in 1992, plane builder Northrop had 9,000 workers in Pico Rivera and 3,000 more in Palmdale.

U.S. development of hypersonics dates to the 1940s, when JPL attached a WAC Corporal rocket in the nose of a German V-2 rocket to create a two-stage rocket as part of the Army’s Bumper program. Launched from New Mexico’s White Sands Missile Range in 1949, the rocket reached 5,150 mph, or about Mach 6.7.

Another major breakthrough came in the 1950s and 1960s with the X-15 program, experimental rocket-propelled aircraft that reached a top speed of Mach 6.7 and were designed to advance understanding of hypersonic flight.

Data from the test flights helped influence the spacecraft design of the Apollo capsule and the Saturn V rocket that took astronauts to the moon.

The Space Shuttle, which flew from 1981 to 2011, also reached hypersonic speeds as it reentered the Earth’s atmosphere, leading to developments in heat-absorbing ceramic tiles and large, rounded edges to lower reentry temperatures.

But despite these incremental developments, hypersonics researchers say there are still big technical hurdles to solve, especially in materials science.

When reentering the Earth’s atmosphere, the outer surface of the space shuttle orbiter encountered temperatures of nearly 3,000 degrees Fahrenheit. Aircraft-grade aluminum melts at a temperature about three times less than that, and the structure of a plane would fail at even lower temperatures.

One possible solution are materials such as titanium or nickel-based alloys, which can be used at speeds slightly beyond Mach 5. Past that, ceramic-matrix composites, a more exotic blend of strong, lightweight fibers, may be an answer.

“The better you can predict a heat load, the better you can come up with materials or structure to handle that heat load,” said Stuart A. Craig, an assistant professor in the aerospace and mechanical engineering department at the University of Arizona who researches hypersonic aerodynamics.

Development of a larger scramjet engine — formally known as a supersonic combustion ramjet — also has been challenging. While rockets can get a vehicle to hypersonic speeds, they are too large, heavy and inefficient to use in lighter missiles or aircraft.

Enter the scramjet — an air-breathing engine that can provide the boost needed to reach speeds greater than Mach 5 but is lighter and more efficient. Unlike a rocket, a scramjet does not need to carry its own tank of oxygen to burn with fuel, which is typically a hydrocarbon or hydrogen. Instead, it uses the air in the atmosphere to serve as an oxidizer for the propellant.

“You can’t afford to build all these big rockets every time you want to fly a hypersonic glide vehicle or a cruise missile,” said George Nacouzi, senior engineer at Rand Corp. and an expert on missile development. “It’s just not practical.”

Scramjets typically start working at speeds of about Mach 5, when the air flow is still supersonic and is highly compressed. NASA’s X-43A aircraft program last decade proved that scramjets could work, though on a smaller scale than a typical plane.

Scaling up can be challenging, said Boeing’s Bowcutt, who developed his X-51A design while at Rockwell International, which was later acquired by Boeing. Since wind tunnels can be limited in size, engineers must also rely more on computer simulations, which can’t necessarily give full verification of a concept in real-world conditions.

But new technological developments have helped make some of these issues easier to solve. In a recent presentation at an aerospace technology conference, Lockheed Martin Skunk Works Vice President Jack O’Banion said increased computer-processing power and digital tools helped the defense giant design a scramjet engine in 3-D for a plane concept known as the SR-72.

Lockheed Martin has said this hypersonic aircraft concept could travel at speeds as high as Mach 6 and be operational by 2030. A Lockheed executive recently disputed speculation that the SR-72 already exists, saying the company’s focus was on hypersonic weapons systems. (The name is a nod to Lockheed’s stealthy SR-71 Blackbird, which first flew in 1964 and reached average speeds of 2,200 mph.)

With digital-printing manufacturing, O’Banion said the company could integrate the scramjet engine with an “incredibly sophisticated cooling system,” allowing the engine to withstand multiple firings for routine operations. No moving parts would be involved.

“It would have melted down into slag if we tried to produce it five years ago,” he said.

With all of these challenges, many researchers say hypersonics probably will be developed first for missiles and later for manned aircraft.

But don’t expect to book a seat on a hypersonic passenger jet anytime soon, as commercial applications of the technology could be at least 30 years away, said Nacouzi of Rand Corp.

That timeline would depend on the business case for hypersonic travel, which would presumably command premium ticket prices. The example of the Concorde passenger jet isn’t exactly promising. An air disaster claimed 113 lives in 2000, temporarily grounding the fleet, but the high costs of operating the jet amid the slower market for air travel after the Sept. 11 attacks were what led to the plane’s ultimate retirement in 2003.

“It’s much easier to start with missiles,” Nacouzi said. “They’re simpler than aircraft. An aircraft has much more systems involved.”