Even by the standards of a military installation, Naval Surface Warfare Center Indian Head can be a dangerous place. The... 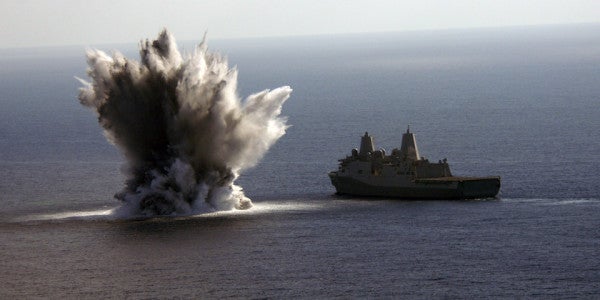 Even by the standards of a military installation, Naval Surface Warfare Center Indian Head can be a dangerous place.

The center on the Potomac River in Southern Maryland is where the Navy's bomb makers come up with new ways to blow things up.

Once explosives and rockets are packed up and sent out to the fleet, they're relatively safe. But the raw ingredients for bombs are much more volatile, and the safety measures at the base are extensive. More than 60 miles of steam pipes snake between the buildings, delivering heat without furnaces, and spikes several stories tall rise into the sky to corral any lightning that might strike.

Making things explode has been central to warfare since the first guns were introduced to the battlefield centuries ago. But Ashley Johnson, the top civilian at the Indian Head Explosive Ordnance Disposal Technology Division, is worried that in the last two decades the United States has put research into bombmaking on the back burner, and risks losing its edge over other countries.

“There's a feeling that it's all been played out,” he said. “And I don't think that's true.”

Related: ‘Earthquake’ Off Florida Coast Was Actually Explosion Set Off By Navy »

Two years into the job, Johnson is trying to reorganize and reinvigorate his 2,000-member team at Indian Head to maintain the nation's lead.

He describes his goal: If there's a 10-point scale with the most powerful conventional explosives at one and nuclear weapons at ten, Johnson wants his team to find weapons that would fall at numbers two or three or four.

“Can we make revolutionary change?” he asked. “Yeah, I think we can.”

It's not just explosives. Johnson's team has responsibility for fuels as well — “anything that burns or goes boom,” says Mike Adams, another Indian Head official. The field's proper name is energetics.

New technologies developed at Indian Head could provide the Navy with the means to deliver more powerful attacks more precisely, and to develop faster, farther-flying missiles.

Other advances could make the shells that carry bombs into part of the weapon. And better fuses would ensure that weapons stay inert until they're fired — and blow up reliably, once they are.

Now Johnson is working to shake the center out of its old approach.

“Its function was a factory first,” he said. “What do factories do? They take orders, they make stuff. … We have to evolve now to a different area where we're doing more.”

The 126-year-old complex of research, testing and manufacturing facilities sprawls across 1,900 acres on a peninsula jutting into the Potomac south of Washington. Buried bunkers stuffed with weapons dot the base.

Cell phones and other radio transmitters are banned from the most sensitive areas. Workers put up literal red flags when they are working inside a building with explosives so in an emergency, rescue crews will know that they're inside.

Indian Head is unusual for a military research complex: It has facilities for everything from basic chemistry research to industrial-scale production.

That means the team members can start at the blackboard working out which combinations of chemicals might yield a bigger blast. From there, others can analyze how the new explosives perform. And finally, the weapons can be put into production.

Beagley showed off a bombproof chamber lined with six feet of reinforced concrete and an inch of steel plates. The room is designed to withstand the blast from 50 pounds of explosives — a suitcase full.

Beagley's team watches explosions using cameras that can catch the action as it unfolds in a matter of nanoseconds.

A nanosecond is one billionth of a second.

“We're doing that for scientific purposes, not just for fun,” Beagley said.

“It is fun,” Adams said behind him.

Across the base is a three-story building that holds equipment for mixing large quantities of rocket fuel and other compounds. A giant bowl capable of holding almost three tons of chemicals stands in the middle of the room beneath a machine that looks like a huge version of a KitchenAid mixer that you might have in your kitchen.

When the components are loaded up and ready to go, the technicians retreat to a separate building to operate the machine. Special cameras are on the lookout for sparks; should anything go wrong, they can set off a system that quickly floods the facility with river water.

The end product — which resembles something like pancake batter — is transferred by a special forklift truck to another building, where it can be loaded into warheads or rocket motors.

Having all the facilities close together also serves to keep people safe.

“When you're dealing with materials like energetics,” Johnson said, “you don't want to have to drive on the road with it.”