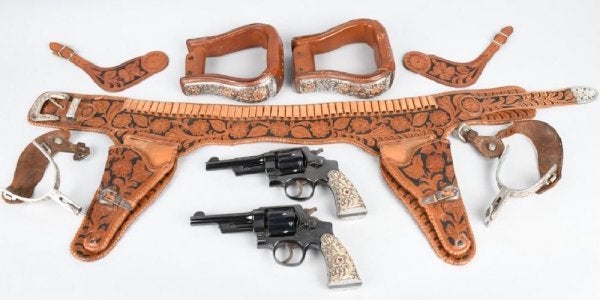 A pair of matching Smith & Wesson .38/44 Heavy Duty revolvers that belonged to legendary actor and U.S. Naval Academy reject John Wayne… The “Million Dollar Hitler Desk” where the Fuhrer hatched his schemes from 1929 until his death…. Two 1877 and 1862 Gatling Guns…. These are just a handful of the remarkable items up for grabs at an upcoming auction of historic firearms and military paraphernalia.

The 685 lots contain a grab bag of weird historical artifacts — the bizarre oil painting “The Yalta Conference” is the most expensive item on the docket at $200,000, followed closely by the 1936 170V Mercedes Benz Coupe once owned by Nazi SA Doctor Rudolf Beuring — but the auction is especially of note because of its wide array of rare and unusual firearms.

Then, of course, there are Wayne's silver pistols, stenciled with his initials and studded with rubies. Here are the details on the lot from LiveAuctioneer:

Both pistols have scarce 5″ barrels with excellent bores. Both retain 98% blue finish and have matching chiseled silver and gold grips with inset rubies. The grips have the initials JW at the top. Both guns cock and lock up tight. The lot includes a hand tooled leather double holster, with silver buckles, and adorned with gold overlay and rubies. There are also a pair of silver spurs with gold floral overlay and a pair of leather stirrups with silver and gold floral panels.

The event, hosted by Milestone Auctions, is set to begin at 10 am on Jan. 27, and while the physical auction will take place in Willoughby, Ohio, you can register and bid online at LiveAuctioneers. And according to Milestone co-founder Chris Sammet, the reaction from gun enthusiasts to the offerings has been “phenomenal.”

“These types of personally owned items simply do not appear at auction, certainly not altogether in one auction,” Sammet told Guns.com. “Collectors of military memorabilia want provenance they can trust, and the provenance that backs this auction’s headliners is ironclad.”

If you're not into historic weapons, there's always this 29-inch bronze bust of Hitler. You know, for that special someone.