In the decades since its ubiquitous AK-47 assault rifle became a staple of fighting forces across the world, legendary Russian … Continued 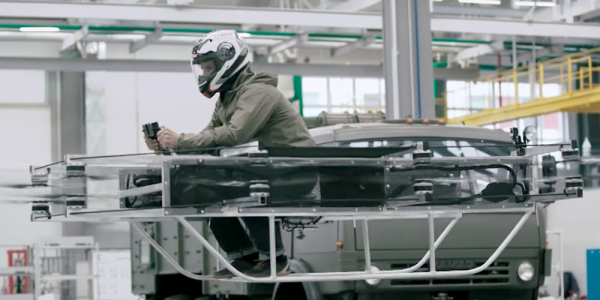 In the decades since its ubiquitous AK-47 assault rifle became a staple of fighting forces across the world, legendary Russian weapons manufacturer Kalashnikov Concern has applied its engineering ingenuity to unusual military-grade technology, from unmanned tanks to autonomous gun systems to a clothing line. But now, Kalashnikov Concern is taking aim at the gadget we were promised as in the futuristic cities of tomorrow: the flying car.

The “flying car” unveiled by Kalashnikov officials in a Sept. 25 promotional video, a slender metal shell festooned with 16 sets of rotors, looks less like a Jetsons-style levitating sedan and more like a skeletal interpretation of those nifty speeder bikes from Star Wars: Return of the Jedi. And as Popular Mechanics points out, the lack of a conventional fuel engine — the carburetor in that “car” — makes “hovercycle” a more accurate description of the vehicle.

That doesn’t make it any less cool, though! The hovercycle is essentially a leather saddle mounted on a gaggle of drone rotors directed through a pair of joysticks mounted to the steel chassis. If anything, it resembles the Kitty Hawk Flyer, a prototype hovercraft developed by a startup with funding from Google cofounder Larry Page.

A lightweight, nimble craft like the Kalashnikov hovercycle carries significant appeal for reconnaissance and logistics operations over uneven ground (conducted by, say, U.S. Special Operations Command in countries like Yemen or Syria), and the U.S. Army has for years worked alongside UK company Malloy Aeronautics to develop a drone-powered “hoverbike” to create “a new class of Tactical Reconnaissance Vehicle (TRV).”

Obviously, the current Kalashnikov prototype is far from battle-ready, lacking both armor and weaponry, which will necessitate design tweaks to accommodate for the additional weight. But with both U.S. and Russian defense agencies making rapid advances in the space, it seems possible we’ll see the first few of these skeletal hovercycles skimming across foreign battlefields in the near future. Let’s hope their operators keep their eyes on the road:

Let’s just hope their operators keep their eyes on the road: