While Kalashnikov is best known for its ubiquitous AK-47 assault rifle, the Russian state-owned weapons manufacturer has expanded its portfolio... 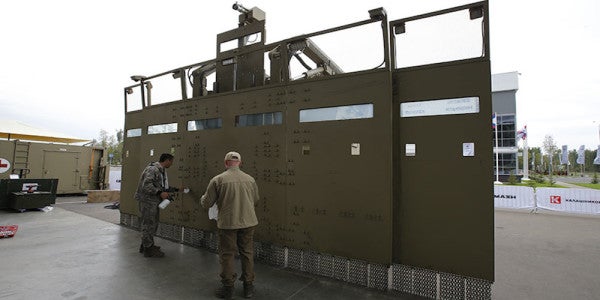 While Kalashnikov is best known for its ubiquitous AK-47 assault rifle, the Russian state-owned weapons manufacturer has expanded its portfolio in recent years, from the AK-12 and AK-15 variant assault rifles eyed by Russia’s Ministry of Defense to the heavily-armored BAS-01G Soratnik combat vehicle, designed to learn and kill all by itself.

Kalashnikov’s latest product, though, isn’t designed to unleash havoc on the battlefield, but to protect warfighters from it — and at first glance, it seems like the Russian equivalent of President Donald Trump’s beloved campaign battle cry: Build. The. Wall.

The company unveiled the retractable barrier, identified only as “Shield” (or “Schit”) by the company, at the Army-2017 International Military-Technical Forum in Moscow on Aug. 23. Though beastly, the vehicle is intended for domestic anti-riot operations rather than full combat downrange.

“Multifunctional protection systems and other police equipment are being developed today in many countries around the world,” Kalashnikov CEO Alexey Krivoruchko said in a statement. “In addition to the ‘Shield’ complex, we are also working to introduce new design solutions for wheeled armored vehicles on the market both for the domestic market and for export supplies.”

Built on a next-generation cross-country chassis by Russian manufacturer KAMAZ, the hulking heavy truck comes outfitted with a 24-foot reinforced retractable shield capable of protecting up to 38 officers. The protected cabin bristles with a water cannon and specially designed gun ports.

Details are thin on the exact specifications and production timeline for the Schit — Kalashnikov did not immediately respond to requests for comment — but with foreign exports on Krivoruchko’s mind, it’s not unlikely that the Department of Defense may run into one of these bad boys in the streets of, say, Tripoli or Damascus at some point in the next decade.

And maybe, just maybe, with the newfound, er, thaw between the U.S. and Russia, the Schit may end up helping out American troops (and local law enforcement!) sooner rather than later. After all, a giant retractable wall is exactly what you need when Schit hits the fan.