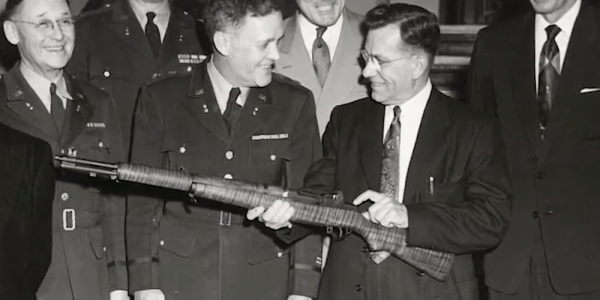 The .30 caliber M1 Garand semi-automatic rifle belonging to John Garand himself — the brilliant Canadian-American gunsmith whose work at the U.S. Army's Springfield Armory yielded the legendary service rifle of American troops during World War II — will officially go up for auction in September through Rock Island Auction Company, Guns.com reports.

The rifle is listed with a whopping estimated price of between $225,000 and $375,000, but it's catnip for the firearms collector who wants to hold a piece of history. According to the listing, Garand was presented with a rifle from the Army's arsenal, manufactured in 1942 with the serial number 1,000,000, at his 1953 retirement in recognition for his impact on the course of the U.S. armed forces.

According to Guns.com, the rifle remained in the possession of the Garand estate until 2003, when it was purchased by then-NRA President Allen Cors. Now up for auction, Rock Island bills the rifle as “absolutely the apex of any advanced M1 Garand rifle collection or any high-end martial arms collection.” Here's the official description:

Exceptional, as presented, with 99% of the arsenal presentation grade blue/black type finish on all the metal surfaces. The stock and handguard are also like-new with beautiful, full-figured, tiger-striped walnut showing no handling marks anywhere. The original presentation case is also in excellent condition. Mechanically excellent.

One interesting tidbit worth mentioning: Garand accepted zero royalty payments from the U.S. government, and the Rock Island listing includes a letter from one Montana resident offering to contribute to the “share of what is due…for his invention of the M1” in the form of an (uncashed) check for $1.

Twenty years after his retirement, the U.S. Congress introduced a bill to award Garand a hefty $100,000 in recognition of his contribution to modern warfare. The bill failed.