Beloved by American ground combat troops, the A-10 Thunderbolt II, or Warthog, is now a kickass toy thanks to an... 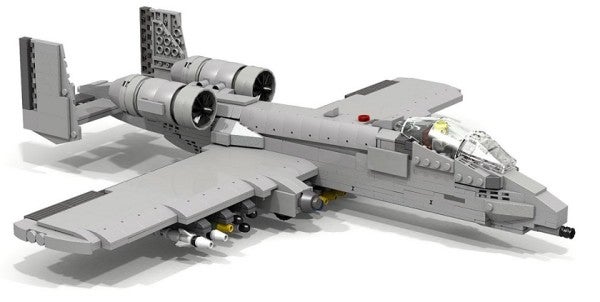 Beloved by American ground combat troops, the A-10 Thunderbolt II, or Warthog, is now a kickass toy thanks to an enterprising Lego aficionado. The YouTube channel Darth Designer posted a series of instructional videos that walk you through how to build a Lego A-10.

The tiny tank-killer boasts a full complement of ordnance, functional landing gear, and a detailed cockpit. This thing even has a rotating cannon. It’s pretty much as badass as the real aircraft, only smaller.

Look at all that “Brrrrrt” in one tiny little package.

The multi-part instructional videos include parts lists as well as a computer-generated mock-up of what a complete Lego A-10 looks like.

Check out the Lego A-10 Thunderbolt II in the video below.