It’s ambidextrous, ergonomic, compact and easy to conceal — but for now, this handgun is only available to a few... 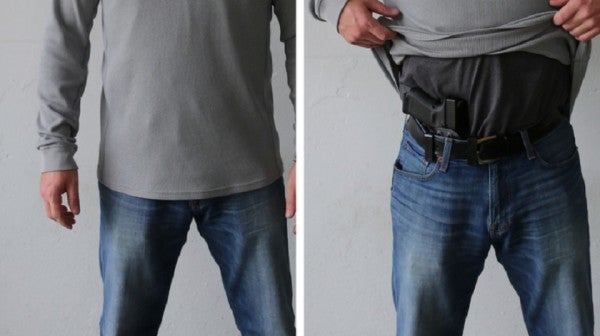 It’s ambidextrous, ergonomic, compact and easy to conceal — but for now, this handgun is only available to a few select Marine Corps personnel.

In May, the Marine Corps began issuing the Glock 19M to service members and civilians with the Criminal Investigation Division and those serving with Helicopter Squadron One.U.S. Marine Corps photo

The branch has a new handgun for devil dogs and civilian personnel who require a concealed carry weapon for their day-to-day duties: the Glock 19M pistol, which the service has taken to calling the M007 after James Bond. Smaller than the M9 Beretta it’s meant to replace, the Corps claims the sidearm is a better fit for those Marines who need to maintain a low profile while remaining armed

“The M007 has a smaller frame and is easier to conceal, making it a natural selection to meet the Marine Corps’ conceal carry weapon requirement,” Gunnery Sgt. Brian Nelson, the Individual Weapons project officer with Marine Corps Systems Command said in a Nov. 8 statement.

After working with the FBI, which adopted the Glock 19M in 2016, the Marines acquired 400 of the handguns in May and began issuing them to service members and civilians with the Corps’ Criminal Investigation Division and those serving with Helicopter Squadron One, also called Marine One, which is tasked with transporting the president.

The M007 comes with a flared magazine well, making it easier to reload, and its grip ditches finger grooves in favor of a textured frame for improved ergonomics and a more comfortable handling experience for a wide range of shooters. It also has an ambidextrous slide and customizeable magazine release, which makes it easily useable by lefties and righties alike.

Beyond the weapon’s specs, it’s the speed of the acquisition that the service is most keen to highlight.

“When we conducted market research, we discovered that the FBI was in the process of buying a new pistol and their test data was very methodical,” a spokesperson for Marine Corps Systems Command told Task & Purpose. “We had never seen a pistol perform to that standard and with such a high level of reliability, the cost estimate over the life of the pistol was paltry.”

Related: The Marine Corps Is On The Hunt For A More Compact Pistol »

Usually, the acquisition process for any piece of gear, let alone a weapon system, takes months if not years from the moment initial requirements are received to the day a new gadget is actually fielded. But by piggybacking on the FBI’s Glock 19M test results, the Corps was able to expedite its requisition process, Lt. Col. Paul Gillikin, the infantry weapons team lead at Systems Command said in the Nov. 8 release.

“The fielding of the M007 is an example of how we can streamline the acquisition process by reviewing another service or agency’s test data to see if it fits the Marine Corps’ need,” Gillikin said. “We received the initial request for a new concealed carry weapon system in April 2016. By collaborating with the FBI, we were able to procure, establish sustainability plans and start fielding the weapon to Marines by May 2017.”

It’s unclear at this point if the Glock 19M will become the service’s standard pistol — though there have beensome rumblings that it might be. Who knows: maybe if the Corps continues to partner with the FBI in its acquisitions, Marines might be able to get their hands on some other other clandestine gear and guns normally used by civilian law enforcement. How about an incognito surveillance van for first sergeants looking to keep eyes and ears on their Marines at all times?